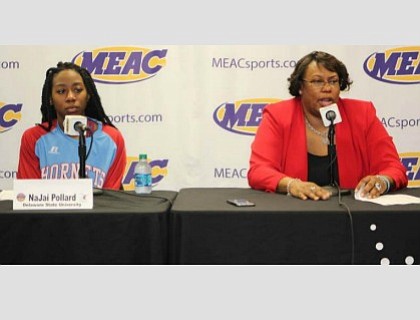 BALTIMORE,Md. — For your daily dose of sports in the world of historically black colleges and universities. Be sure to check out the 'HBCU-RoundUp' online compiled by Phinesse Demps of the Baltimore Times.

Dover, Del. (Nov. 20, 2016) --- Delaware State’s NaJai Pollard has already proven she's one of the top players in the Mid-Eastern Athletic Conference. The sophomore forward is showing teams in other leagues just how dominant she can be.

Pollard led all players with 27 points and 13 rebounds to propel the Lady Hornets to their first win of the season, 61-49, over Wagner at the Spiro Sports Center this afternoon. The reigning MEAC Rookie-of-the-Year and Preseason All-MEAC First Team selection was 13-for-17 from the field and three-of-five at the free throw line today. She also had a personal-best five blocks. Pollard scored a career-high 38 points vs. Lehigh in DSU’s previous outing on Nov. 16.In the last two games, Pollard has scored 65 points on 26-for-33 shooting from the floor (78.8%), and pulled down 25 rebounds.

GREENSBORO (November 20, 2016) – North Carolina A&T received its first-ever at-large bid to the NCAA FCS playoffs Sunday when it was announced the Aggies will play the Richmond Spiders in a first-round matchup 2 p.m., Saturday, November 26 at E. Claiborne Robins Stadium in Richmond, Va.

The Aggies (9-2) will play in the NCAA playoffs for the fifth time in school history and for the first time since 2003. The Aggies are 1-4 all-time in the playoffs with their only win coming in 1999 when they defeated No. 1 Tennessee State. It was nine years ago when the Aggies were in the midst of a 27-game losing streak. It was only four years ago when the Aggies were mired in NCAA penalties for a low academic progress rate score. Now the Aggies will head to the postseason in back-to-back seasons for the first time since the 1991 and ‘92 seasons.

“This truly means this program has gained a lot of respect around the country which is truly tremendous when you think about where we were when we took over this program,” said N.C. A&T coach Rod Broadway who is in his sixth season. “Being selected is a tremendous honor for our university, our alumni, our fans, our athletics department and our program. Richmond is a tremendous program who routinely gets to the postseason, so they know what this is all about. But we’re going to go out there and fight and see what happens.”

N.C. A&T’s body of work includes a win over FBS Kent State on Sept. 10. After losing to FBS Tulsa the following the week, the Aggies won seven straight games. Their only other loss came to nationally-ranked North Carolina Central in the regular-season finale. The Aggies have been nationally-ranked all season in both the FCS STATS and NCAA Coaches polls. Before their loss to NCCU, the Aggies were ranked No. 9 in both polls.

N.C. A&T features one of the best-running backs in the nation in Tarik Cohen who is ranked in the top-3 nationally in rushing yards (1,518), rushing yards per game (138.0), yards per carry (7.6) and rushing touchdowns (18). He is also a Walter Payton Award candidate for FCS offensive player of the year. True freshman receiver Elijah Bell leads the Aggies in receiving yards with 554. Senior Denzel Keyes and Bell are 1,2 in the MEAC in touchdown receptions with nine and eight respectively.

Defensively, the Aggies are led by senior defensive lineman Marquis Ragland and redshirt junior linebacker, Jeremy Taylor. Ragland has 44 tackles and 9.5 tackles for loss while Taylor leads the team in tackles (75), tackles for loss (10.5) and interceptions (4).

Richmond (8-3) will be making their third straight playoff appearance and their 11th overall.