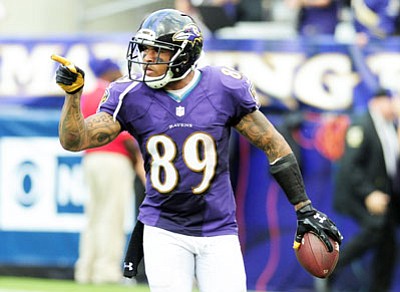 BALTIMORE — Steve Smith Sr. was released by the Carolina Panthers a few seasons ago and had a choice to make. The man considered the most intense wide receiver in the National Football League (NFL) was out of a job because the franchise that gave him a shot to be a star had given up on him.

Hardly in need of another reason for the chip on his shoulder, Smith was now given new motivation. He was close to signing with the San Diego Chargers, but instead chose to play for John Harbaugh, a coach equally as fiery.

The following two seasons were highlighted by plays in which Smith exhibited the tenacious style that he plays the position. His stiff arm of Adam Jones in his first game against the Cincinnati Bengals was one of the best plays ever by a Ravens receiver.

Smith was, by and large, the spark plug the Ravens hoped he would be when they signed him. In just two seasons, Smith has rewritten many of the Ravens single season and single game receiving records.

Jim Harbaugh, head coach at University of Michigan and former NFL quarterback, was asked recently about Smith and said he wants him back for another year.

“If he wants to come back, he is welcome, absolutely," Harbaugh said at a press conference on Monday. "You like every good football player you can get, but I don’t want to speak for Steve. He has had an unbelievably awesome career. He got his 1000th catch, so he needs to be commended for that. Congratulations to Steve on that accomplishment. I am looking for many more this year.”

Smith became the 14th wide receiver in NFL history to catch 1,000 passes. The fact that he accomplished the feat as a Raven is ironic because of the many shortcomings that Baltimore has encountered at wide receiver over the years.

The 2016 season is a bonus round for Ravens fans because Smith originally made the decision to make 2015 his final year. Smith decided to come back after rupturing his Achilles against the Chargers last season.

There was no way a player with the heart that Smith possesses was going to end his career by way of injury. Smith was on his way to another 1,000-yard season before the Achilles injury.

Smith collected football cards recognizing wideouts for having 1,000-yard receiving seasons. He envisioned himself being on one of those cards.

After 16 seasons in the NFL, Smith has eight 1,000-yard receiving seasons under his belt. Although he may not have another season like that in him, Smith is still a force to be reckoned with.

Through eight games, Smith has 44 receptions for 516 yards and three touchdowns this season— quite an accomplishment for a 37-year-old receiver considered to be too old to return from a major injury, and once considered too small to play the position in the NFL.

This will likely be Smith's final NFL season. Ravens fans need to cherish their final opportunity to see one of the best receivers of all time.