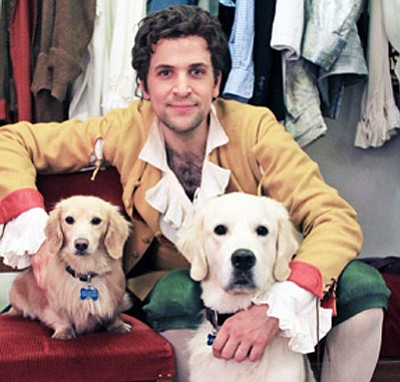 BALTIMORE — Earlier this year when making his debut in the role of Mephistopheles in the Houston Grand Opera’s production of Faust, Luca Pisaroni confessed that as a child in Italy he was unpopular.

“I was the only one who liked opera,” he explained to the Houston Press. However, Pisaroni, who speaks English, French, Spanish and Italian has seen his popularity soar. Lately, the bass-baritone has been preparing to perform in the Baltimore Symphony Orchestra’s (BSO) presentation of Handel’s Messiah,” one of the world’s most best known and frequently performed opera.

“Handel’s Messiah is one of the cornerstones of the classical repertoire,” Pisaroni said. “It contains many moments of incredible beauty. I want the audience to come and to be amazed by the power of the music. It’s truly a magical work and perfect for the holiday season.”

And, if spotted in Baltimore, residents might see two of Pisaroni’s favorite traveling companions, Lenny and Tristant.

“Lenny is a golden retriever and Tristan is a miniature dachshund. They always travel with me,” Pisaroni said. “They are endlessly entertaining and they keep life normal. I travel 10 months out of the year for work and having them with me makes me feel at home wherever I go and I am constantly amazed by the way they communicate with each other. One look is worth a thousand words.”

Pisaroni’s career, on the other hand, might be worth a million words. Since his debut with the Vienna Philharmonic at the Salzburg Festival, which was led by Nikolaus Harnoncourt, Pisaroni has continued to appear at the world’s leading opera houses, concert halls and festivals.

This season alone, Pisaroni’s concert appearances have included Rossini’s Stabat Mater at the Musikverein Wien in Austria; Mozart’s Concert Arias and Schubert’s Orchestrated Songs with the Wiener Virtuosen and the Stuttgarter Philharmoniker in Germany; Bach’s B Minor Mass with the Gewandhausorchester in Germany; and Berlioz’s Romeo and Juliet with music director Michael Tilson Thomas and the San Francisco Symphony.

“I have been very fortunate in my life to be able to perform in amazing venues with wonderful orchestras,” Pisaroni said. “I have very fond memories of Beethoven’s Missa Solemnis with the Los Angeles Philharmonics conducted by Michael Tilson Thomas and Beethoven’s 9th Symphony at the Musikverein in Vienna. I am very excited to make my debut in Baltimore because the orchestra has a great reputation for its sound and for the devotion of its musicians.”

Pisaroni says he had a love for opera while growing up in Parma— the hometown of Giuseppe Verdi. Ever since he was nine, it’s been a part of him. However, he says the career chose him instead of the other way around.

“You could say that I almost had no other choice than to become an opera singer. There is something magical and inexplicable about being on stage and being able to express emotions and thoughts through the power of music,” he said. “Music is a language and it has been said many times that music can express more than words. Performing is to me like an addiction. I am truly fortunate to have a profession I am so passionate about.”

Performing the Messiah has always been a thrill and Pisaroni says he hopes to take his Baltimore audience on a special journey during the performances.

“As a bass-baritone, I get to sing one of the best-known arias in the repertoire, ‘The trumpet shall sound,’ with the contribution of a solo trumpet. It’s a mighty aria … I hope to take the listener through an intense journey of sounds and emotions.”

The Baltimore performances are scheduled for 7:30 on Friday, December 2 at the Joseph Meyerhoff Symphony Hall; 7:30 p.m. Saturday, December 3 at the Strathmore in Washington, D.C.; and 3 p.m. Sunday, December 4 again at the Meyerhoff. Tickets for the performances range from $25 to $99. For more information or to purchase tickets, visit: www.bsomusic.org.