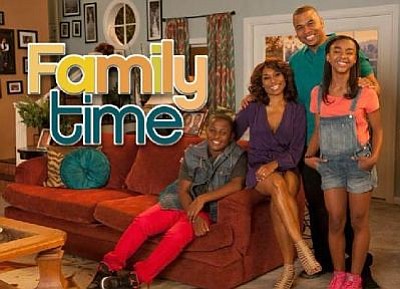 Family Time comedically chronicles the lives of the Stallworth family, headed by the dad Tony, a struggling general contractor played by Omar Gooding, and his wife Lisa, an unfulfilled stay-at-home mom portrayed by Angell Conwell. When they are not battling each other, they are contending with a host of family, friends, and neighbors including their mischievous children Devin (Bentley Kyle Evans, Jr.) and Ebony (Jayla Calhoun), Tony's financially-challenged best friend Donnie (Clayton Thomas) and Lisa's feisty sisters Rachel (Tanjareen Thomas) and Lori (Paula Jai Parker).

The half-hour situation comedy was created by Bentley Kyle Evans (The Jamie Foxx Show, Martin) and is produced by Evans and partner Trenten Gumbs (Love That Girl), both of whom produce the successful Bounce TV original series In The Cut which is currently wrapping up its second season in the Tuesday 9:00 p.m. ET time slot.

Series stars Gooding and Conwell also serve as producers of the show. Gooding is best known for appearing in television shows such as Hangin' with Mr. Cooper, Smart Guy, Deadwood, Barbershop: The Series and Playmakers. He has also starred in feature films Baby Boy and Ghost Dad. A two-time NAACP nominee, Conwell's television credits include The Young and the Restless, The Real Husbands of Hollywood, NYPD Blue, Sabrina the Teenage Witch, Moesha and 3rd Rock from the Sun. She also appeared in MGM's Soul Plane alongside Kevin Hart, Sofia Vergara and Mo'Nique, in the comedy The Wash as well as in Baby Boy with Gooding.