What to watch in the vice presidential debate 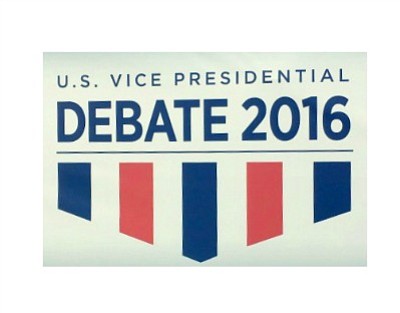 A picture inside Longwood University in Farmville, VA where the Vice Presidential Debate takes place on Tuesday, October 4, 2016. Travis Sattiewhite/CNN

continued — Can they help close the likeability gap?

Clinton and Trump both have record high unfavorability ratings: the latest CNN/ORC poll puts Clinton's at 54% and Trump's at 59%. Both VP candidates may try to sand off some of the rough edges and make people more open to backing their ticket.

Pence has argued that Trump is a decent and good man worthy of comparisons to Ronald Reagan. He has talked about quiet moments of prayer and reflection with Trump. And Kaine has vouched for Clinton's honesty and said that he can brag about Clinton in a way that Clinton can't brag about herself.

But it is one thing to say good things about their running mates, and it's another to show it. And this is where stories and anecdotes -- something this campaign has been short on -- can be helpful. Some of that was featured at the conventions this summer, with family members vouching for the candidates. For swing voters, who are sitting on the fence out of disgust with both candidates, humanizing and memorable portraits could be helpful.

In the first debate, Clinton introduced Alicia Machado, a beauty queen who Trump disparaged for gaining weight. She also got Trump to say it was "smart" that he possibly didn't pay federal income taxes. Both subjects have ended up in campaign ads and underscored Clinton's argument against Trump in new ways.

Pence and Kaine have the same opportunity. Trump failed to bring up Benghazi and the Clinton Foundation in his debate, and didn't break much new ground on the e-mail scandal either. A recent North Carolina poll shows that a majority of voters in that crucial swing state are bothered a lot by those issues. Clinton didn't talk much about Trump making his products out of the country.

So Pence and Kaine both have opportunities. The key is to cover old ground in new ways, either by using catchy phrasing (Clinton's "Trumped-up trickle down" was not so catchy), or by introducing actual new information. Clinton clearly had studied Trump's record. Pence and Kaine have a chance to frame an old issue in a new way, but it means hitting the briefing book and figuring out how and when to drop it in a debate. Both should study Clinton's playbook.

Does anyone make it to Saturday Night Live?

Alec Baldwin and Kate McKinnon have their hands full with Trump and Clinton. But surely there is room on the SNL stage for their running mates?

Yes, Kaine and Pence are boring by comparison. That is their purpose in this race, to soften their running mates. Pence says he isn't a name-caller. Kaine embraces his suburban dadness. They are standard issue politicians from the pre-Trump era. And perhaps that's where the funny is -- Kaine and Pence as a nice-and-nicer duo beleaguered by the foibles of their running mates. SNL's writing crew will be watching. Tuesday night could turn into a Saturday Night cold open. Casting tip: Bobby Moynihan as Kaine and Beck Bennett as Pence.

Or perhaps "Hamilton" creator and star Lin-Manuel Miranda, who is hosting.