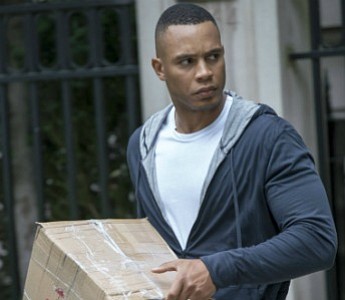 (CNN) — (CNN) -- "Empire" waded into #BlackLivesMatter Wednesday night and the hit Fox series is being hailed for it.

The network has found success with the show which follows the travails of the Lyons, an African American family in the music industry.

At the end of Wednesday's episode oldest Lyon son Andre is roughed up by New York City police officers as he moves boxes from his old home. The screen then goes black.

The scene resonated with many viewers who took to social media to praise it.

It was only the second episode of season 3 of the series. "Empire" writer Carlito Rodriguez told The Hollywood Reporter there had been discussion about addressing police brutality during season 2.

Law enforcement's use of force has become a racially charged issue in recent years with fatal police shootings of African American men in Ferguson, Missouri; Tulsa, Oklahoma; and other US cities.

The writers were not trying to be topical or "tap into a hot button issue," he said, just reflecting an all-too-common experience for some African Americans.

"Unfortunately, in the world we live in, this is fast becoming an everyday thing," Rodriguez said. "And some of us in that writer's room, we come from the kind of backgrounds where getting pulled over at gunpoint has become routine."