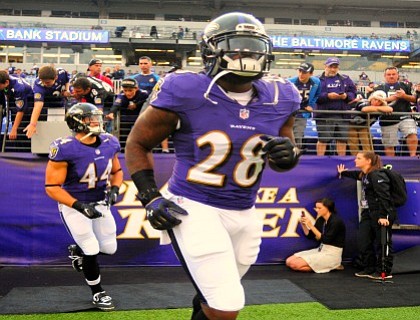 Terrance West takes the field before the Baltimore Ravens vs. Oakland Raiders game at M&T Bank Stadium in Baltimore, Maryland on October 2, 2016. West was given the start in the game. Courtesy Photo/nfl.com

BALTIMORE — Through four games, the Baltimore Ravens averaged only 94.2 rushing yards per game— a far cry from the successful ground and pound Ravens’ running teams of the past.

Under the leadership of offensive coordinator, Gary Kubiak, the Ravens and their zone-blocking scheme averaged 126 rushing yards per game. They ran their way to a close defeat at the hands of the New England Patriots on the road in the divisional playoffs.

Now, under the guidance of offensive coordinator Marc Trestman, the Ravens rushing attack is struggling. Through four games, Baltimore only has three rushing touchdowns.

Even though they are 3-1 and sitting atop of the AFC North, something has to change.

Head coach John Harbaugh is trying to find a way to jumpstart the running game and made a surprise decision to deactivate Justin Forsett.

“We were looking for a spark, I guess, more than anything," Harbaugh said after their loss to the Oakland Raiders on Sunday. "It’s nothing against Justin Forsett, for sure. Justin came out this week, and he knew the situation, practiced great and just did a great job like he always does."

Harbaugh said they wanted to see if they could kick start the running game by giving Terrence West the start and using Buck Allen to spell him.

"That was the idea," Harbaugh said. "I think I need to make clear— that doesn’t mean we think Justin Forsett was the problem with the running game, by any chance. But, you’ve got to try to do something."

The Ravens found some success running the football but Baltimore lost the lead on the final drive by the Raiders. West was able to pick up 113 rushing yards on 21 carries, and he scored a rare rushing touchdown. His 100-yard rushing performance was the first by a Ravens running back since week five of the 2015 season when Forsett rushed for 121 yards in a loss to the Cleveland Browns on October 11, 2015. That is almost a full calendar year.

Now in his second season with his hometown team, West was glad to see the running game get back on track.

“It feels good to contribute and put it all on the line, and do what I need to do to help this team win, any way [I can]," West said after the Ravens loss on Sunday. "The offensive line did a great job opening up the holes, and I took advantage of it.”

The Ravens will next host their beltway rivals in the Washington Redskins. Washington is giving up an eye-popping 133 yards rushing per game. Their run defense is among the bottom three in the NFL.

Sunday will present a golden opportunity for the Ravens to run the football successfully and notch another win on the season.