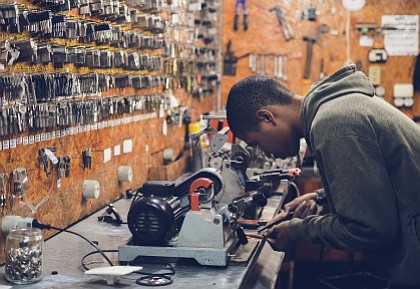 In America, we love one in particular.

The story of the great entrepreneur.

You know the one: The lone genius toiling away in the garage, equipped with nothing but an idea, a pocket protector and a relentless desire to succeed.

In the Bible of American business, vaunted names like Edison, Ford, Jobs, Gates and Zuckerberg are the heroes of these stories -- and they are rightly celebrated for their exceptional innovations. As were millions of others who realized the American Dream through innovation, imagination and initiative. And each one brought countless others along with them on their dream ride.

These entrepreneurs were and are exceptional innovators. Entrepreneurs are a big part of the reason why a list of the World's Most Valuable Corporate Brands features plenty of companies that didn't even exist two decades ago.

But these stories also propagate a myth that is keeping America's political leaders from focusing on what it will really take to revitalize our economy. The myth is that great ideas and great companies are derived almost entirely from individual greatness.

Real-life entrepreneurship is a lot more complicated. For starters, even the most brilliant entrepreneur can only build a thriving business in the right ecosystem; one that provides essential ingredients like access to capital, good infrastructure, educated workers and smart and consistent rules and regulations.

Unfortunately, these ecosystems that are essential to an entrepreneur's success are breaking down in many parts of America. America's can-do spirit---the kind that in the 1960s compelled a whole nation to put a man on the moon -- is being threatened by creative "road blocks" many emanating from government.

But if you're not planning to build the next billion-dollar tech startup, why should you care?

Because entrepreneurship is the key to creating jobs, increasing the pay of working people, resurrecting struggling communities and spurring growth and innovation. It's the lynchpin of our economy.

According to the Kauffman Foundation, virtually all net new jobs created in the U.S. between 1980 and the middle of this past decade were created by firms that were five years old or less -- about 40 million jobs.

Entrepreneurship is also a strong indicator of a region's overall economic health. Researchers have found that cities with strong entrepreneurial ecosystems are generally wealthier, faster growing and have better employment pictures than other cities.

Unfortunately, the opposite is also true. Take Detroit, an almost textbook example of municipal failure. Among the 15 largest metropolitan areas in the United States, Detroit had the lowest rate of entrepreneurial activity of any city over the past few decades, something that Silicon Valley transplant Jerry Paffendorf is trying to change. Kevin Plank, CEO founder of Under Armour, is also trying to leverage his entrepreneurial spirit to revitalize Baltimore.

Show me a community with lots of entrepreneurs and an ecosystem that supports them and I'll show you a place on the rise.