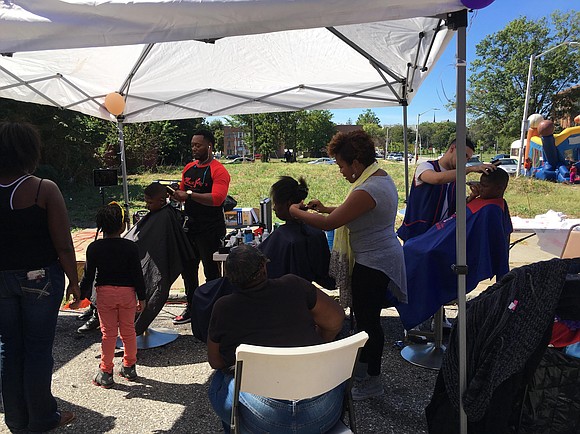 The Montgomery County, based God’s Connection Transition, The Poppleton Community Neighborhood Association and Quanta Davis, a local entrepreneur partnered to host the “Sowing a Seed Festival” on Sunday, September 25, 2016 in the Poppleton neighborhood in Baltimore City. Organizers garnered support from local businesses, including Majic Clips Barbershop and Poppleton residents were treated to free haircuts. Bags of food were distributed, shoes and clothing were handed out, and games and activities were provided for the entire community during the festival. Organizers believe the festival was a way to bring the entire community together in love to heal since in the past year and a half there have been several murders in the neighborhood. Courtesy Photo

God’s Connection Transition (GCT) was founded in Montgomery County, Maryland in 2007 by Arnold and Theresa Harvey— a couple who spawned a movement proving that compassionate acts can make a big difference in the lives of people who are less fortunate.

Arnold is the president and Theresa is the CEO of the family-owned and operated nonprofit based in Gaithersburg. With the help of their daughter, Angela Harvey, son-in law, Raphael Clement and committed volunteers and interns, GCT’s founders remain on a mission of meeting the basic needs of low-income families and people experiencing homelessness while also promoting greater levels of self-sustainability.

What began as a way to help people living on the streets on Arnold’s driving route as a waste collection driver led to uniting more like-minded people who want to move communities forward in various local areas, including Baltimore.

On September 25, 2016, GCT helped to spread a message of community love and unity in the Poppleton neighborhood in Baltimore by hosting the inaugural “Sowing a Seed Fesitval” in collaboration with The Poppleton Community Neighborhood Association (PCNA), and Quanta Davis, a local entrepreneur who operates a food truck in Poppleton.

Bags of food were distributed, shoes and clothing were handed out and 40 brand new bicycles were given away to members of the community.

Additionally, toys and household items were raffled; free haircuts and hairstyling, as well as moon bounce fun and games were provided for both adults and youth in the community.

“This is the first event GCT has sponsored in Baltimore,” Angela Harvey, GCT’s Operations Manager said. “However, we have been distributing ‘love bags,’ which are bags filled with food, toiletries and other necessities, to people experiencing homelessness in Baltimore for the past year.”

Although reducing hunger is GCT’s primary mission, the organization hosts ommunity events in low-income neighborhoods to support those in need. Items from hygiene products and household items to tents, sleeping bags and camping supplies are sometimes provided to individuals experiencing homelessness.

“GCT partnered with the PCNA and local businesses to host the Sowing a Seed Festival. I have lived in Poppleton for more than 20 years, and as far as I know, it's the first time an event like this has taken place in this neighborhood, specifically for the residents in this community,” said Wali Mutazammil, PCNA’s president, explaining why the progressive festival was noteworthy. “Members of the PCNA and I desired to do something to help our community come together and heal. In the past year and a half, there have been several murders. Tensions have been high between the younger and older residents, and groups from different streets have animosity towards one another. We felt that the festival was a way to bring the entire community together in love. We wanted to show that the neighborhood association cares about the people who live here…and to show that businesses in this community care about the people who live here. We wanted to sow a seed of compassion, generosity and solidarity.”

Arnold added that his organization plans to continue various forms of outreach work in Baltimore.

“We will continue to do our homeless outreach activities. I anticipate that this festival will be an annual event and the PCNA agrees,” Arnold said. “We are also looking forward to reaching out to other at-risk neighborhoods in the city to see if this event can be duplicated in other areas.”

For more information about GCT, to volunteer or to make donation to the organization’s cause, visit: www.gctservingpeople.org.