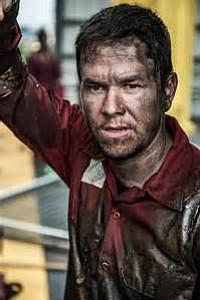 BALTIMORE — Academy Award nominated Mark Wahlberg (Planet of the Apes) stars in the Summit Entertainment presentation of Deepwater Horizon, a film based on the 2010 BP oilrig explosion. “Deepwater Horizon” shows what happens in a crisis when courage takes over.

The dramatic disaster thriller tells of the final hours of the Gulf of Mexico oil spill as worker Mike Williams (Wahlberg) says goodbye to his wife Felicia Williams (Hudson). His job is to build or repair the rig. When Mike finds out that the executive boss, Donald Vidrine, played by Malovich (Conair), missed inspections to save a hundred thousand dollars for a multi-billion dollar company, he enlists his immediate supervisor Jimmy Harrell (Russell) who decides to test the rig. The test indicates that the numbers are not matching – not a good sign. While the tests continue Mike goes to his room to call his wife and Jimmy takes a shower. Vidrine pressures worker Jason Anderson played by Ethan Suplee (“Boy Meets World”) to note that the rig was in good condition so they could continue because they were behind schedule. Just as they start to drill disaster strikes and heroes are made.

Deepwater Horizon also brings in the human side to the disaster showing the personal lives of some of the 120-plus men and women like Andrea Fleytas played by Rodriguez (“The Bold and the Beautiful”) who navigates the rig; Caleb Holloway played by O’Brien (The Hunger Games) who was working on the first rig that brokel Shane Roshto played by Henry Frost (Roots), and Adam Weise played by Jeremy Sande (Universal Soldier) that works on the rig for three weeks at a time. It also tells the event in a way anyone can understand how oil rigs work and as a result walk away with respect for the job and its workers.