Early Detection Can Be a Life Saver 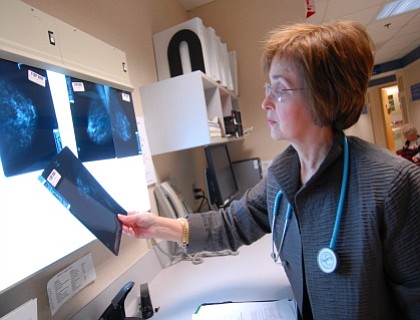 October is Breast Cancer Awareness Month, which is an annual campaign to increase awareness of the disease. Recently, Amy McCoy reflected back on this time in her life two years ago.

“2014 was a very difficult year in my life,” recalled McCoy. “I had recently lost my father to lung cancer, and my mother had received a breast cancer diagnosis. “I had gone to Advanced Radiology for an examination for an upcoming surgery, and during the exam, a lump was detected. That lump had been there since I was 18. I never worried about it because it had been a cyst. However, this time it turned out to be a very large tumor, and before I left Advanced Radiology that day, I was informed I had breast cancer.”

“I give the credit to God,” said the mother of three. “I am so appreciative of the care I received at the Comprehensive Breast Center at Saint Agnes. “They made me feel like I was their only patient, and gave me the kind of care that every patient deserves. “

Located at 900 S. Caton Avenue, Saint Agnes’ Comprehensive Breast Center is one of the first 135 hospitals in the U.S. to be fully accredited by the National Accreditation Program of Breast Centers (NAPBC). Physicians from multiple specialties come together to develop the most effective and comprehensive treatment plan for each patient.

“I had a medical oncologist, a radiation oncologist. a surgeon, a financial planner and the list goes on,” said McCoy. My mother is a patient there, and her cancer is also in remission. They are phenomenal.”

She added, “The other caveat to this is that what sets the African American community apart is that they tend to have higher mortality rates for breast cancer. People once thought that economics were a factor, but we now believe there may be some biological differences that have resulted in the more serious cases.”

With special expertise in medical oncology, Dr. Griffiths is highly recognized for her development of unique treatment plans and various treatment options.

“African-American women tend to have a higher incidence of more aggressive cancers, and often do not respond as well to hormone-based pills and other treatments,” said the medical oncologist. “Certain cancers have a more aggressive course when these treatments don’t work.”

She added, “Since African American women tend to not be as responsive to these treatments, we believe biological differences are a contributor to the disparities regarding black women and breast cancer. While this hasn’t been pinned down, we strongly believe there is a component picture in there.”

“Mammograms continue to be the most effective screening exam for breast cancer,” she said. “I recommend annual mammograms starting at age 40. Mammograms help to detect at an earlier phase, as opposed to waiting for a person to feel something in their breast. Lifestyle changes such as maintaining a healthy body weight, regular physical activity, limiting alcohol consumption, not smoking, and eating more fruits and vegetables also lowers the risk.”

She added, “Early detection is the key. The death rate for breast cancer has dropped by 36 percent since 1989 due to early detection and new advances in treatment. Getting a mammogram may be a little uncomfortable, but it’s a whole lot better than being diagnosed, and then being told nothing can be done. Women have to be healthy and take care of themselves so that they can be here with those they love and care about.”

For more information about the Comprehensive Breast Center at Saint Agnes, visit www.stagnes.org