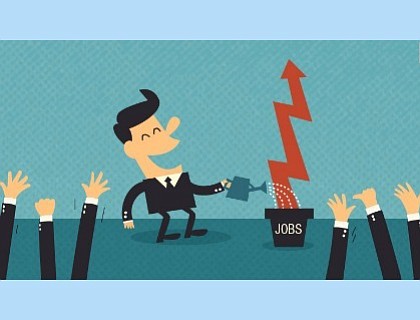 (CNN) — NEW YORK (CNNMoney) -- America is getting one of its last checkups before the election.

The Labor Department will publish the September jobs report at 8:30 a.m. ET Friday. Amid campaign promises of better jobs, wages and economic growth, the report serves as a reality check. And this one could be historic.

Here are four things to know about Friday's jobs report.

1. Good but not great expectations

Economists surveyed by CNNMoney forecast that the economy added 175,000 jobs in September. That would be up from the 155,000 jobs gained in August.

Unemployment is projected to go down a bit, to 4.8% from 4.9%. Unemployment fell below 5% this year for the first time since 2008 -- a sign of the job market's recovery from the Great Recession.

And wage growth should show more signs of life, economists believe. Wages are projected to have grown 2.6% in September compared with the year before. That's well below what the Federal Reserve wants to see -- 3.5% -- but better than the meager 2% growth of prior years.

If the economy added at least 51,000 jobs in September, the United States will have gained 15 million jobs since U.S. employment hit its low in February 2010. That's the measure the Obama administration commonly uses, not accounting for the steep job losses in 2009.

If you include those losses, the economy has gained 10.6 million since President Obama took office.

No matter the time frame, the job market has been one of the brighter spots in the slow recovery from the Great Recession.

Job gains in September will be the big news on Friday, but don't discount the August jobs number, which will be revised. August's job gains are often significantly revised because it's a hard month to get a read on.

With college kids returning to school, teachers still on summer break and would-be job seekers on vacation, August tends to be a volatile month for job gains. Friday's new number should be more accurate.

Federal Reserve leaders have hinted they plan to raise interest rates in December -- if the economy holds up until then.

The jobs report is one of the most important metrics for the Fed when it considers raising rates.

For example, Fed chair Janet Yellen said in May that a rate hike over the summer would be "appropriate." The following week, the awful May jobs report came out, and Yellen and her colleagues reversed course and didn't raise rates all summer.

There was some divide at the Fed's last meeting: Three of 12 voting members wanted to raise rates, an unusually high amount of discord. September's jobs report could strengthen -- or weaken -- the case for a rate hike in 2017.