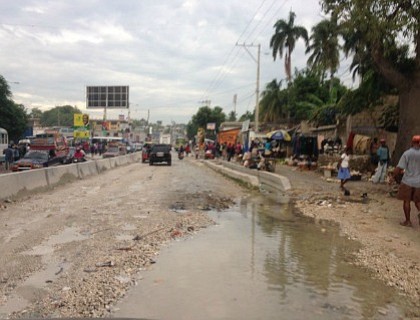 At least 271 people have been killed since Matthew made landfall in Haiti as a Category 4 hurricane, and officials in the country warn that the death toll is only likely to rise. Dave Brodsky is President of the Chanje Movement in Leogane Dave Brodsky

(CNN) — NEW YORK (CNNMoney) -- Silicon Valley is banding together to help Haiti, after the island nation was slammed by Hurricane Matthew.

Nonprofit startup New Story has raised about $300,000 from execs at companies like Salesforce, Google, DocuSign and Amazon in the past 24 hours.

The money will go directly to New Story's efforts to rebuild homes after Matthew, which has destroyed some 3,200 homes in Haiti and displaced more than 15,000 people.

With 350,000 people affected, Haiti is facing its worst humanitarian crisis since the devastating earthquake six years ago.

New Story differentiates itself from other nonprofits by pledging complete transparency to donors. It operates both as a crowdfunding platform and as an urban planner, partnering with local nonprofits to vet families in need of housing. (In Haiti, it partners with Mission of Hope.)

It then raises money for one family at a time, with a goal of roughly $6,000 apiece, which is how much it costs to build a sustainable home with basic concrete blocks and a tin roof. Donors can see the specific family helped by their money and how the funds were used -- what went toward timber, cement and roofing materials.

Hurricane Matthew is hitting particularly close to home for New Story, which has rebuilt 211 homes in Haiti since launching in December 2014. (It also builds homes in El Salvador and Bolivia.)

He said that the homes helped keep 2,000 people safe during the hurricane.

New Story got involved in the current crisis when DocuSign CEO Keith Krach called Hagler on Tuesday morning. Krach, who is an adviser and donor to New Story, said he understood just how detrimental another natural disaster in Haiti would be. Thousands of people are still living in tents six years after the 2010 earthquake, Krach told CNNMoney.

"We feel it's extremely important after a disaster that people are giving to a transparent organization," said Hagler, noting that 100% of donations go to construction. (Red Cross and other nonprofits have been criticized for spending a large portion of donations on overhead.)

Anyone can donate to New Story's relief efforts. So far, the vast majority of the donations have come from Silicon Valley, with Salesforce contributing $100,000.