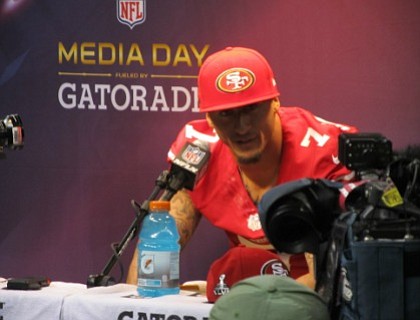 (CNN) — SAN FRANCISCO, California (CNN) -- San Francisco 49ers quarterback Colin Kaepernick, who sparked a national movement in sports by not standing during the national anthem to protest racial injustice, will make his first start of the season Sunday.

The announcement was made by 49ers head coach Chip Kelly on Tuesday. Kaepernick replaces Blaine Gabbert.

"We need to improve on the offensive side of the ball, and this is the decision we've made," Kelly said.

Kelly added that he and his staff were "very analytical" about the decision to switch quarterbacks and wanted to make the move earlier in the week so Kaepernick could get more repetitions with the first team.

This will be Kaepernick's first start this season. The 49ers, who are 1-4, are on the road Sunday at the Buffalo Bills at 1 p.m. ET.

Kaepernick once was seen as a rising star, leading the 49ers to Super Bowl XLVII in New Orleans, a game they lost to the Baltimore Ravens. But he hasn't started a game since last November 1, when the 49ers lost 27-6 to the Rams. Later that month he was shut down for the remainder of the season because of a shoulder injury. He had multiple surgeries during the offseason and was limited in the preseason because of arm fatigue.

Kaepernick, who is biracial, first made waves during a preseason game in August when he sat during the national anthem to raise awareness about racial issues such as controversial police shootings of African American men. He has said he's received death threats for his stance, which some see as unpatriotic.

"A lot of mail has come in. I really don't spend too much time going through it, i still have a job to do, still have to focus on football," Kaepernick told CNN's Dan Simon.

But his protest also has gained positive traction in the NFL and beyond in recent weeks, with college, high school and even youth football players taking a knee or sitting during the anthem. Kaepernick last month was featured kneeling on the cover of TIME magazine.

Kaepernick said last month he intended to donate the first $1 million he earns this year to different organizations that help communities, although he did not name specific ones.

"I'm not anti-America," he said. "I love America. I love people. That's why I'm doing this. I want to help make America better."