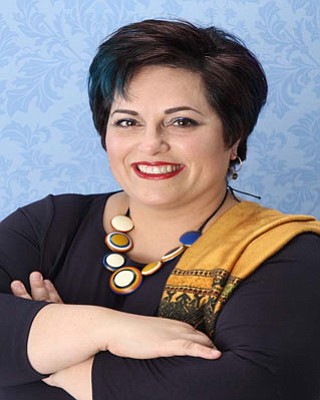 Mergenthaler Vocational-Technical High School Art teacher Athanasia Kyriakakos was named 2016 Maryland Teacher of the Year. As Teacher of the Year, Kyriakakos will serve as a speaker and education advisor for the state of Maryland, participating in national meetings and conferences. She will also be honored by the president at a White House event next spring. Courtesy Photo/Baltimore City Public Schools

BALTIMORE — Athanasia Kyriakakos was sitting nervously, palms sweating and her heart beating as fast as it ever has before.

Kyriakakos, who was named Baltimore City Teacher of the Year earlier this year, waited with great anticipation for the announcement of who would represent the entire state with such an esteemed and prestigious title.

When Kyriakakos’ name was read as the winner at the 26th annual black tie Annual Teacher of the Year gala at Martin’s West, bedlam erupted at her table, which included her parents, husband, children and others.

“My mother came out of nowhere and bear hugged me and that was only the second time she had ever done that and I’m almost 50-years-old,” Kyriakakos said. “My family was crying, everybody was crying, it was unbelievable.”

It’s the second consecutive year that someone from Baltimore City Schools system earned the title of Maryland State Teacher of the Year. Ryan Kaiser, of the Mount Washington School, earned the honor last year.

The finalists were selected by judges from Maryland education organizations, representing principals, teachers, school boards, teachers’ unions, parents, and higher education, according to a news release.

Finalists were measured against criteria that included teaching philosophy and results, community involvement, knowledge of general education issues, and suggestions for professional and instructional improvement.

“I just didn’t think they’d select a Baltimore teacher for the second year in a row,” said Kyriakakos, who has been teaching art at City Schools since 2011, working with students from Pre-K through high school.

In her current role at Mergenthaler Vocational-Technical High School, Kyriakakos says that she challenges her students to explore knowledge and to express themselves through the arts.

“I believe in them and teach them to believe in themselves,” she said. “This is my greatest contribution to education. Every child who comes into my classroom learns through the journey of art that they can succeed in anything.”

Born in the United States, Kyriakakos’ rich and varied background includes a decade of living in Greece as a child. She spent time teaching in Connecticut, studying and teaching at the school of the Art Institute of Chicago, and has held positions in both Greece and Sweden, according to her biographer.

It was during her time in Connecticut, just after receiving her Bachelor of Fine Arts Degree from the Maryland Institute, College of Art, that she found her passion— connecting students to the possibilities of art.

In large part because of her dedicated tutelage, several of Kyriakakos’ students have earned local and state awards. She includes student artwork as part of her own exhibitions in an effort to bring awareness to the importance of arts education.

As a result of winning state Teacher of the Year, Kyriakakos will now serve as a speaker and education advisor for the state of Maryland, participating in national meetings and conferences. She will also be honored by the president at a White House event next spring and will go on to represent Maryland in the competition for the title of National Teacher of the Year.

“I’m hoping that they move the White House event up before President Obama leaves office because that would be the crowning achievement— meeting President Obama,” Kyriakakos said. “I also want my daughter to go with me.”

City Schools CEO Dr. Sonja Brookins Santelises said in a statement this is an exciting time for Kyriakakos, her family, students and the school system.

“[Kyriakakos] personifies the kind of teacher every student deserves,” Santelises said. “Caring, dedicated, talented, energetic and an advocate for helping students express themselves in positive ways.”