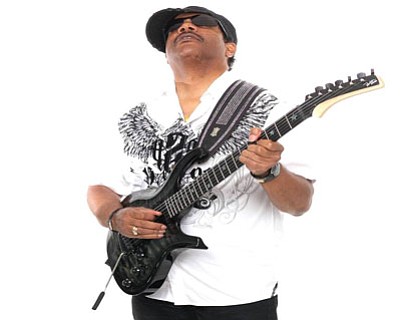 From one listen to Vernon Neilly’s new album “Outta Time” it’s evident that the “chill” of hip-hop music has influenced his approach to the epic sounds of jazz.

Being born in the Philippines and raised in the Bahamas and the United States makes jazz guitarist Vernon Neilly a man of the world. From one listen to his latest project “Outta Time,” (Boosweet Records) it’s evident that the “chill” of hip-hop music has influenced his approach to the epic sounds of jazz. This eight-song project, featuring 15 musicians and vocalists, leaves fans full.

Neilly’s extensive career in music, includes playing for— and with— legendary artists Etta James, George Clinton, The Temptations, The Dramatics, Warren G, Howard Hewitt, and Teena Marie. The award-winning jazz musician calls them “the vehicles”— those who helped him make it in the business by giving his skills and talent a platform.

Neilly doesn’t get his just due here in the U.S. However, his musicianship has catapulted him to celebrity status overseas. The crowds there claw at him as if he was Jimi Hendrix back from paradise. In fact, one of my favorite selections is a Jimi Hendrix hit song titled “Fire,” featuring Vernon and lead guitarist Greg Howe (Michael Jackson, Rihanna, Justin Timberlake). The vocals on this track are reminiscent of Prince.

The single ‘Outta Time,’ featuring Neilly’s 20-year-old son Khalif, debuted on Billboard Charts in August at No. 6 on Hot Singles. “He is my youngest son. He help me write the lyrics to the first two songs,” said Neilly. “He’s got an artist he is producing coming out before the end of the year.” Khalif, a hip-hop lyricist, also appears on “They Don’t Care.”

Like his award-winning projects G-Fire I and II, Outta Time was released from, Boosweet Records, the label he launched 15 years ago in Los Angeles.

“I do it this way [independently] because that’s my only option,” he admitted. “This is my fifth project. I have been working on it for a few years.

Because the people I wanted to record on the project have busy schedules, it took a little while.”

The wait was worth it! Nods go the tracks: “Get Yo’ Lyfe Rite,” featuring Victor Johnson because of the Hendrix/Prince flavor; “Nassau Nights,”

featuring Frank Gambale and Cacau Santos, because that Latin feel keeps thing moving; and it’s nearly impossible to make out if there’s a guitar or keyboard or both playing in “Metta Funk Trip,” featuring futuristic sounds with Neilly and Kiko Lourirro.