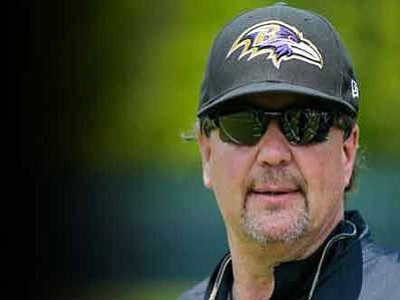 BALTIMORE — John Harbaugh is not afraid to make a tough decision if it means helping the Baltimore Ravens.

After the Ravens only scored 10 points in a home loss to the Washington Redskins, Harbaugh felt it was time for a change. He decided he had to relieve offensive coordinator Marc Trestman of his duties.

The team has had issues running the football since Trestman took over. Being able to run the football is a part of both Harbaugh and the Ravens DNA.

“We didn’t run the ball enough," Harbaugh said after the Ravens loss on Sunday. "When you go back, and you look at it, I feel like we were running the ball well enough to run the ball a lot more than we did. I think we had 12 or 13 plays in the last two-minute drive that took the passing total up to 46 or whatever it was.

Now Harbaugh will turn to former quarterbacks coach, Marty Mornhinweg and his ties to the West Coast offense. Mornhinweg took over play call duties for the Eagles offense in the final six games of the 2006 season and into the NFC Playoffs. The Eagles won all six games and utilized a more balanced run/pass attack.

Teams that become one dimensional on offense are a lot easier to stop. The Ravens need to be more effective running the football and Harbaugh hopes Mornhinweg will bring some kind of balance to the Ravens offense.

"It is beneficial. We’re in a good position to have a guy with that kind of experience here," Harbaugh said. "It’s experience in this system, basically, the West Coast terminology. He fits right in. I know there will be some things that he will tweak, but the basic system is not going to change.

"The way we adjust some routes maybe, or the way we organize our protections or some of our play-action passes, that’s all of the stuff that Marty has to do the way he believes it should be done. But the basic system terminology [and] the way we operate remains the same.”

Joe Flacco is excited to get going with Mornhinweg, even if it means there will be more run plays called. The two have worked closely together since Mornhinweg came to the Ravens in 2015.

During his career as an Offensive Coordinator, Mornhinweg's offenses have finished first, second, fourth, fifth, nineth, tenth and twelfth in total offense, and is regularly highly ranked in big plays. Mornhinweg is known for his outstanding work with quarterbacks, which includes Hall of Famers Steve Young and Brett Favre.