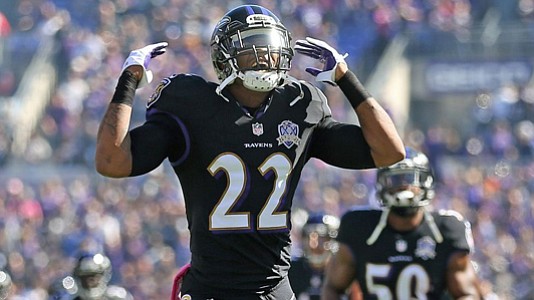 Baltimore Ravens cornerback Jimmy Smith pumps up the crowd at M&T Bank Stadium before a play during the 2015 NFL season. Foxsports.com

BALTIMORE — The Baltimore Ravens lost a close game to the New York Giants on Sunday, October 16, 2016. Protecting a lead with 1:24 seconds left, the Ravens gave up a touchdown on a 64-yard catch and run by Odell Beckham Jr. won the game.

The play came on a fourth and one situation. Defensive coordinator Dean Pees made the call for man-to-man coverage, but Baltimore's best cover corner, Jimmy Smith was not on the field.

Smith left the game with a concussion and did not come back onto the field to start the second half. Unfortunately for the Ravens, not having Smith on the field has been a frequent occurrence.

The Ravens signed Smith to a four-year contract extension worth $48 million with $21 million guaranteed in 2015. Smith battled lingering effects from a four injury that landed him on the injured reserve list in 2014.

Despite the discomfort from the injury, Smith posted three interceptions last season. The sixth-year cornerback's impact cannot truly be measured by his personal stats, however.

Baltimore has relied upon his coverage skills to minimize the effectiveness of opposing wide receivers. For example, when Smith was in the game against Beckham Jr., the dynamic receiver only had two catches for 11 yards and did not score a touchdown.

Beckham ran wild once Smith was out, posting six catches for 211 yards and two touchdowns, including the game-winning score.

Much has been made about Beckham's antics after the whistle when it comes to interaction with opposing cornerbacks. Smith had a message for Beckham leading up to the game.

"All that extra hitting and talking is not going to fly," Smith said on Thursday. "Hit me after the whistle— there's going to be a fight."

Another example of how Smith can impact a game without it showing the box score came on the Ravens final goal line stand in Super Bowl XLVII. The Ravens were once again protecting a late lead.

It was fourth down and the Super Bowl was on the line. San Francisco 49ers quarterback Colin Kaepernick went to his top target, wide receiver Michael Crabtree throughout the game.

Crabtree lined up against Smith and Kaepernick lofted a touch pass in his direction in the corner of the end zone. Smith jammed Crabtree at the line and prevented him from getting into position to make the catch. Smith's defensive play sealed the Super Bowl win for the Ravens that year.

At 6’ feet 2” and 206-pounds, Smith is the ideal blend of size and athleticism to play cornerback. His long arms allow him to be disruptive at the line of scrimmage.

The Ravens pass defense is ineffective when Smith is not in the game. Smith is not viewed as the clear best at his position like Deion Sanders or Darrelle Revis were, but like them, he allows the Ravens defense to do a lot more schematically when he is in the game.

Pees, does not have to worry about rotating coverage over the top of Smith to help him cover the speedy receivers that are featured throughout the NFL. Smith has the speed to turn and run with most receivers if he does not get a quick jam on them at the line.

His coverage ability allows the defense to focus on taking out other aspects of the offenses that they face. When healthy, Smith can be relied upon to take care of the best receivers.