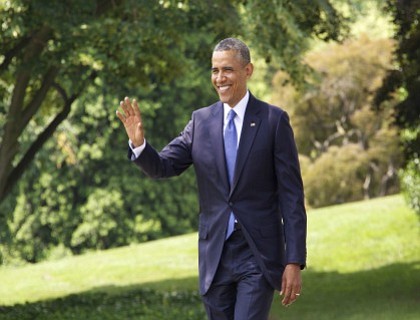 (CNN) — The notoriously devoted exerciser in chief, President Obama has shared his current favorite workout jams for Wired magazine's November issue, showing an eclectic interest and a love of super speedy beats of rhythm and sound.

Here's what puts the groove in President Obama's own personal Let's Move! campaign.

Presidential candidate Hillary Clinton may have been criticized by Donald Trump's campaign for her love of Beyonce, but she is not the only political member of the Bey Hive.

The Obamas' friend and supporter, Beyonce gets the No. 1 spot on the President's workout list with "Get Me Bodied."

Coming in at No. 2 is a fuzzed-up guitar throwback to those eight-track days that could really put some funk in your trunk as you do your classic crunches. It's the Isley Brothers with "Live It Up."

No. 3 jazzes up the list with Nina Simone's "Sinnerman." This uptempo version of the traditional African-American spiritual came out in 1965, and the act of running -- to the rock, the river, the sea, the lord and the devil -- features prominently.

With No. 4, the President goes international, picking a more recent tune: "Emergency" from the Swedish duo Icona Pop.

No. 5 is a party classic, "Let's Get It Started" by the Black Eyed Peas.

No. 6 comes from a group of New York-based Brazilian expatriates called Forro in the Dark, with their 2009 world classic "Perro Loco."

No. 7 is from Beyonce's equally famous spouse, rapper Jay Z: "Off That," from his "Blueprint 3" album.

No. 8 is "Elevator Operator" from Australian artist Courtney Barnett, a song that tells the story of a man who, "feeling sick at the sight of his computer," skips work, running off to see the world from a rooftop.

No. 9 is another oldie but goodie: "Could You Be Loved," from Bob Marley and the Wailers.

And finally, rounding out the top 10, Sting's "If You Love Somebody Set them Free." Perhaps the President plans to join the famously devoted tantra yoga lover in some mindfulness sessions after this crazy election season.

The President's summer picks and vacation playlists have been a regular feature on the White House website.

The workout list is up on Spotify, so if you check it out, see whether the songs inspire you to move. As the immortal Beyonce sings, "a little sweat never hurt nobody."

Particularly if it's accompanied by some interesting tunes.