A Survivor’s Story: The Cost of Surviving Cancer 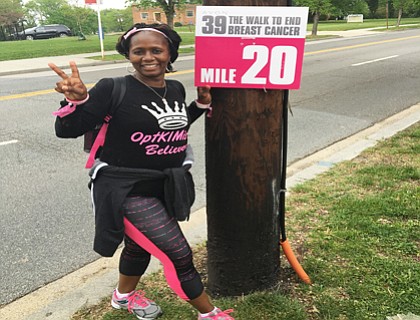 Kimberly Curtis is a grateful cancer survivor but knows first hand that the cost of treatment for breast cancer from diagnosis through treatment can quickly erode a patient’s life savings. Courtesy Photo

Despite having what she says is excellent health insurance, the local resident has also had to reach deep into her pocketbook to pay for the costs associated with the illness.

Curtis, a registered nurse, said co-pays for doctor visits and examinations, as well as medications the change in diet that most survivors experience can leave many breast cancer patients broke.

“I am a grateful survivor. I am very grateful for the services I received,” she said. “[However], a couple of things that are very concerning include the frequent visits, meal plan changes and the financial expenses that I’ve incurred after I was diagnosed.”

After her initial diagnosis three years ago, which was followed by surgery and other planned treatments, Curtis, like most cancer patients, had to schedule visits with several oncologists including surgical, radiation and chemotherapy and medical. Such visits often occur every three months during the first year and, if treatments prove to be going well, the patient can then visit oncology doctors once every six months.

“However, if one decides to be on medication treatment, that person must see the medical oncologist every three months for five years,” Curtis said.

It’s also suggested that patients consult with a nutritionist.

“I decided to eat healthier to lose weight and to do all that I could to not have the cancer come back,” Curtis said. “With these frequent follow-up visits comes a very expensive medical bill. I am blessed to have insurance and yet there are still bills that are constantly coming in. To be honest, I am not even sure if all my original bills are fully paid. It’s saddening at times.”

Reportedly, insurance companies, patients and government health plans are paying $1 billion per year just for a routine test to confirm a diagnosis and billions more for treatment.

Dr. Sharon Giordano at the MD Anderson Cancer Center in Houston, Texas, says patients often get stuck with thousands of dollars in bills that can take years to pay off.

Giordano and a team of doctors recently went through insurance claims filed by more than 14,000 breast cancer patients between 2008 and 2012 and found expenses across a single class of drugs varied by as much as $46,000.

“There were big variations in the cost of treatments we could prescribe,” Giordano told NBC News. “What I think was more concerning was that the top 10 percent of patients are getting really hefty bills costing them $10,000 or more.”

Those with so-called catastrophic health insurance plans, which charge low premiums but which also don’t reimburse for much, paid the most out of pocket. “Expenditures for cancer care have grown from $72 billion in 2004 to $125 billion in 2010 and are estimated to reach $158 billion by 2020,” Giordano’s team wrote.

“The costs of cancer care are increasing at an unsustainable rate— two to three times faster than other health care costs. Patients’ out-of-pocket costs have also been rapidly increasing,” Giordano said.