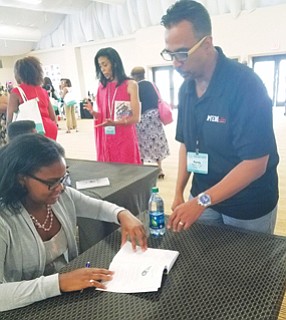 Nia Jolivet received a medal and certificate for her entry in the 2016 Literary Masterminds Contest, an initiative powered by a partnership with Brown Girls Books Publishing Company and Jack and Jill of America (JJOA), Inc. Her short story entitled, "The Best Gift" is about her grandmother. Courtesy Photo

BALTIMORE — Nia Jolivet, a sixth grade student at Sudbrook Magnet Middle School in Baltimore County was recently honored at the Jack and Jill of America Convention in Palm Desert, California. She received a medal and certificate for her entry into the 2016 Literary Masterminds Contest.

Jolivet was excited to submit a short story when she heard about the opportunity to be an author by submitting a piece on the theme “The Power to Make A Difference.”

The title of her work “The Best Gift,” highlights an unforgettable story about her grandmother.

The Literary Minds Masterminds Contest is an initiative powered by a partnership with Brown Girls Books Publishing Company and Jack and Jill of America (JJOA), Inc. in an effort to promote the literary talents of children by choosing the best short stories and poem entries for inclusion in a JJOA children's book, according to the organization’s website.

When asked about being selected to be part of the children's book project, Nia said, "I was surprised and [I] felt good about having my story published. Signing the books gave me a good feeling because people wanted the book."

Nia's dad, Arnold Jolivet ll is proud of his baby girl. "She is a dreamer who loves life and will try new things. She is fearless and very competitive."

Although Nia is uncertain about a career as a writer, she is certain about continuing to enjoy middle school, participating in the French magnate program and learning more in the field of science in pursuit of her dreams of becoming a doctor.

An anthology will be published and released at the 2016 42nd Biennial National Convention in Palm Desert, California.