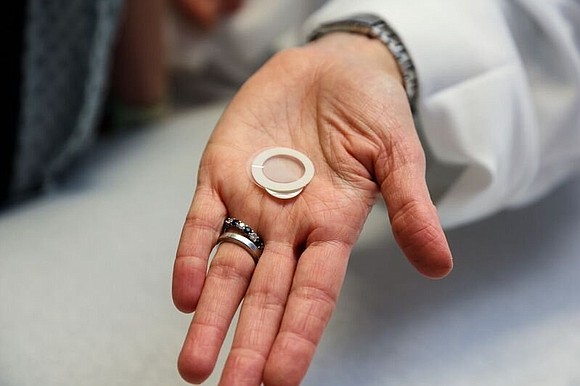 The Viaskin peanut patch is coated with peanut proteins, which are absorbed by the skin. Arkansas Children's Hospital

Peanut allergies are among the most serious food allergies, requiring constant vigilance. In severe cases, exposure to even trace amounts of the nut can trigger a deadly reaction. But according to a new study published last week in the Journal of Allergy and Clinical Immunology, a tiny skin patch may help treat peanut allergies.

Over the course of a year, researchers from the Consortium of Food Allergy Research tested 74 peanut-allergic volunteers, ages 4 through 20, to see whether a daily Viaskin peanut patch could help raise their peanut threshold. The patch, called epicutaneous immunotherapy, released peanut proteins into the participants' skin, building cellular tolerance to the nuts.

The results showed that participants who received higher doses of peanut protein in the patch were able to consume more peanuts after a year. The patch was the most effective on children ages 4 to 11 and significantly less effective on older participants, according to a statement from the National Institutes of Health, which funded the study through its National Institute of Allergy and Infectious Diseases.

The peanut patch trial was conducted at five research sites: Arkansas Children's Hospital, the National Jewish Health Center in Denver, Johns Hopkins University, the Icahn School of Medicine at Mount Sinai and the University of North Carolina at Chapel Hill School of Medicine.

The newly published results were from the first year of the trial, but the researchers will continue monitoring the participants for a total of two and a half years.

Before the trial began, researchers assessed each volunteer's peanut allergy via an oral food challenge with food containing peanuts. The median amount of nuts tolerated, before having allergic symptoms was about one-seventh of a peanut, according to Dr. Stacie M. Jones, chief of allergy and immunology at Arkansas Children's Hospital and the study lead.

After establishing an allergy baseline, the participants were given quarter-size patches on the insides of their upper arms for adolescents, or on their backs for younger kids.

The patches were administered daily for the 52-week period, but Jones said placement varied in order to allow any skin irritation to heal.

The risks of the peanut patch

One of the main concerns for researchers, as well as peanut-allergic volunteers, was whether the patch would trigger a harmful allergic reaction. Of the 74 participants, one teenager had to leave due to a patch reaction, according to Jones.

About 80% of the kids who used peanut patches (both low- and high-dose strength) had some reaction, Jones said, but they were mainly mild, like bumps and redness on the skin surrounding the patch.

Jones explained that the patches, which are manufactured by DBV Technologies, are coated with sub-clinical doses (meaning they have a very small potential of triggering allergic reaction) of raw peanut material. When peanut proteins are released into the skin, it starts an immune reaction in the cells, she said.