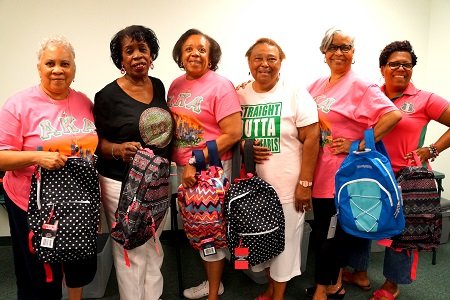 BALTIMORE — It’s back-to-school time and thanks to Epsilon Omega Chapter of Alpha Kappa Alpha Sorority and Epsilon Omega Foundation, 700 Baltimore City school students will return outfitted with backpacks filled with supplies. The effort is part of The AKA One Million Backpacks Project, a component of educational enrichment, which focuses on the sorority’s ability to support education by supplying backpacks loaded with school supplies.

The backpacks were distributed to students in grades Pre-K to 12 on August 12, 2016 at a back-to-school fair held at the Ivy Family Support Center on Dolfield Avenue in Baltimore City.

The Education Committee of Epsilon Omega Chapter, chaired and co-chaired by Frances Parks and Jean B. Owens, led the chapter in the implementation of the “Backpack Project,” now in its second year. According to committee member Bettye Adams, the 700 backpacks double the number prepared last year by the sorority and foundation.

“As a school administrator, I see daily the needs of students who cannot afford to replenish school supplies on a regular basis,” said Adams. “Students who start school fully prepared and equipped have a positive energy as they begin the school year. Epsilon Omega's goal is to ensure students are equipped at the beginning of each semester.”

She added, “The project is evidence of the Epsilon Omega Chapter of Alpha Kappa Alpha Sorority and Epsilon Omega Foundation joint efforts to impact the lives of students and their families of the Greater Baltimore Community.”

Adams noted that at the North Atlantic Regional Conference held in April 2016 in Hartford, Connecticut, Epsilon Omega Chapter won first place for the largest number of backpacks distributed in the region last summer. The Backpack Project is chaired by Claudette Edgerton-Swain.

“Now, the children of Baltimore are packed, polished and prepared for this school year,” said Edgerton-Swain, who is a retired Baltimore City schoolteacher. “They were blessed to be the recipients of a backpack full of school supplies, and with special blessings for a successful school year from each of the ladies of the sorority. Each member had a loving hand in selecting just the right school supplies. We all purchased and packed the backpacks as if they were for our own child. The beauty of it all, was that no child left the back-to-school fair empty-handed.”