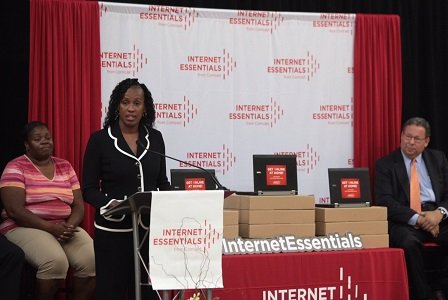 David L. Cohen, Senior Executive Vice President and Chief Diversity Officer of Comcast Corporation, made the announcement alongside six-time Olympic Medalist Jackie Joyner-Kersee, who was recently named the national spokesperson for Internet Essentials. The two kicked off a multi-city tour that, over the next six weeks, will stop in Chicago, Houston, San Francisco, Denver and Philadelphia where the company will announce more than $2 million in grants to community-based organizations that provide vital digital literacy training and Internet access.

“In the last five years, we’ve learned that no single company or government program is ever going to fix the digital divide and that solving a big, difficult societal issue like this takes nothing short of a movement,” said Cohen. “We are so proud that thousands of community partners around the country have helped us make a meaningful dent in the digital divide. With the recent announcement of our expansion to HUD-assisted homes, we look forward to bringing this essential connection to even more families over the next five years. There is still more good work to do.”

“I’ve dedicated my life to inspiring young people to have the confidence to succeed in both academics and athletics,” said Joyner-Kersee. “At my foundation’s community center in East St. Louis, I’ve seen first-hand the kids who grow up without Internet service at home and the impact it has on their futures. I’m proud to represent Internet Essentials and help close the digital divide, so every child can have the chance to develop to their fullest potential and reach their dreams.”

The progress report comes on the heels of a recent announcement by Comcast to expand the program’s eligibility to households receiving HUD-housing assistance, including public housing, Housing Choice Voucher, and Multifamily programs.

In total, there are up to two million HUD-assisted homes in Comcast’s service area across the country, which, according to HUD, account for approximately 40 percent of all its households. The announcement means even more individuals, including: seniors, veterans, and adults without children, are now eligible to apply to the program.

Internet Essentials from Comcast is the nation’s largest and most comprehensive high-speed Internet adoption program. It provides low-cost high-speed internet service for $9.95 a month plus tax; the option to purchase an internet-ready computer for under $150; and multiple options to access free digital literacy training in print, online and in-person. For more information, or to apply for the program, visit: www.InternetEssentials.com.