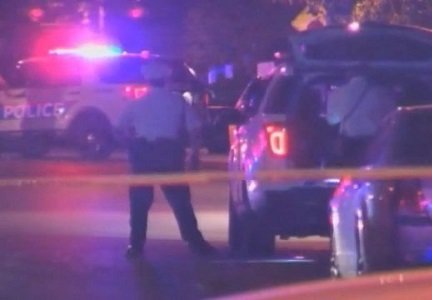 Police in Columbus responded to a report of an armed robbery shot and killed a 13-year-old boy who they say pulled a gun from his waistband. It was later determined to be a BB gun. (Photo: WOIO)

(CNN) — A police officer shot and killed a 13-year-old black robbery suspect in Ohio's capital after the boy pulled a BB gun out of his waistband, police said, a shooting that city leaders said would be investigated thoroughly to determine if charges are warranted.

The boy, Tyree King, died at a hospital after an officer shot him several times Wednesday evening outside a house in east-central Columbus, police said.

"This is the last thing that a police officer wants to do in their career. Unfortunately ... it becomes necessary at times to defend themselves," Jacobs told reporters at a news conference in Columbus.

The police officer will be placed on leave for at least a week, pending an investigation, Jacobs said.

Jacobs and Columbus Mayor Andrew Ginther expressed condolences to the boy's family and called for calm, saying the investigation into whether the officer's gunfire was justified will take time.

Ginther called the child's death troubling and said it should be a "call to action for our entire community."

"Why is it that a 13-year-old would have nearly an exact replica of a police firearm on him in our neighborhoods -- an eighth-grader involved in very, very dangerous conduct in one of our neighborhoods?" Ginther said.

"A 13-year-old is dead in the city of Columbus because of our obsession with guns," he said.

The shooting happened after an alleged robbery victim told police that a group had pulled a gun on him and demanded money.

Officers eventually saw three people matching the alleged robbers' descriptions, and two of them ran. When officers caught up to them and tried to arrest them in an alley, King pulled what appeared to be a handgun from his waistband, and an officer shot him, police said.

The weapon turned out to be a BB gun with a laser sight attachment designed to help a shooter's aim, according to police.

At Thursday's news conference, Jacobs held a picture of an example of the type of BB gun she said was involved.

The gun "turns out not to be a firearm in the sense that it fires real bullets, but ... it looks like a firearm that can kill you."

A person who was with King was interviewed and released pending further investigation. Others are being sought, police said.

"It's senseless that something like this has to happen. We're talking about a 13-year-old that made a decision," Columbus police spokesman Sgt. Rich Weiner said, according to CNN affiliate WSYX-TV. "The investigation is still ongoing, and we still have people that we want to find."

Jacobs said the officer's future with the department beyond the period of administrative leave depends on the investigation. The officer also will need to see a psychologist before being allowed to return to duty, she said.