Ravens Terrell Suggs and Steve Smith Sr. continue to work their way back 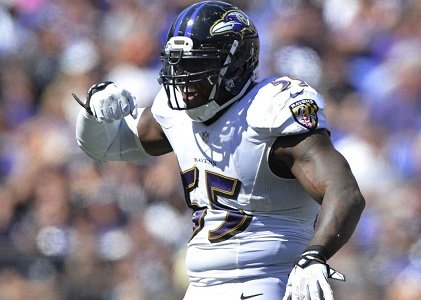 Ravens outside linebacker Terrell Suggs celebrates after making a play during the 2015 NFL season. (Photo: NFL.com)

The Baltimore Ravens season opener was a game in which the team got to see two of their most important players return from injury. Both Steve Smith Sr. and Terrell Suggs ruptured their Achilles causing them to miss a significant portion of the 2015 season.

The two veteran players each decided to give it another whirl and return for at least one more season. Head coach John Harbaugh has grown close to both players and leaned on them to be leaders in the locker room.

Suggs was with the Ravens before Harbaugh got to Baltimore. Harbaugh gave Suggs the game ball after the season opening 13-7 win over the Buffalo Bills. It was fitting because Suggs had one of the team's two sacks and led the defense as they held the Bills to only 160 total yards on offense.

Suggs was excited to receive the game ball and had a short message to his team before breaking them down in the locker room after the game.

"We played Raven football today," Suggs said. "No matter what happened, we stayed in the fight and continued to play Raven football. We need 15 more like that."

Harbaugh was delighted to see his two leaders back in the mix for the Ravens.

“I thought they both played well," Harbaugh said on Monday. "Neither one of them have played much. Steve didn’t play at all in the preseason. Probably, both of those guys feel that way about the way they played.

Although Smith only had five receptions for 19 yards, he was happy to be back on the field and get a win.

"There was a lot of emotion," Smith said. "We got the win, so I am good. The wins and losses, you evaluate them the same way. It's one in the win column for us. We will go in and get correction."

Suggs was equally pleased with the win. He commended defensive coordinator Dean Pees for the game he installed to stop the Bills high-scoring defense.

"They came to play, we did too," Suggs said after the game. "We executed and won. There are things to work on, and we have to make a big jump from the first week to the second week. Dean Pees called a hell of a game. We did it collectively. It was a collective effort. It's still coming. This is my first live action in a year. I will continue to chop wood. You can always get better. It's the first game, but I feel good about it."

The Cleveland Browns are next on the schedule for the Ravens. Both Suggs and Smith will continue to work their way back to form as the season goes on. Expect to see Smith more involved in the offense when Baltimore takes the field in Cleveland on Sunday.