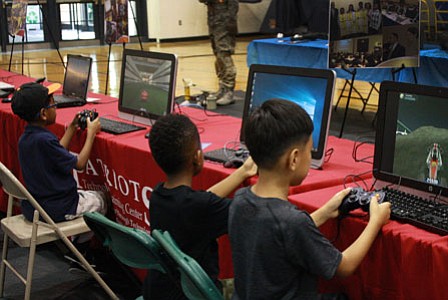 More than 20 nationally recognized scientific and engineering organizations from the Maryland Science Center to the Army Research Laboratory came fortified with kid’s games and simulation activities to engage the city’s young scientists, mathematicians and engineers.

“Morgan State University is taking a deeper step with the K-12 population throughout the city of Baltimore through the sponsorship of the Baltimore MUREP Aerospace Academy’s Saturday program and activities like today’s STEM Extravaganza,” said Don Terry Veal, Chief of Staff for Morgan State. “We’re welcoming the community here to a first-class educational environment and it doesn’t get any better than that.”

MUREP (The Minority University Research Education Program) is a nation-wide, initiative of the Office NASA's Office of Education enhancing the capabilities of Historically Black Colleges and Universities (HBCUs) and other minority serving institutions to assist under-represented students in pursuit of STEM careers.

Darlene Walker and Priscilla Mobley from NASA’s Goddard Flight Center came from Cleveland, Ohio to greet students and parents and demonstrate that people of color belong in STEM careers.

“Programs such as this are targeted toward underserved and under-represented students,” said Priscilla Mobley who serves as Activity Manager or the MUREP Aerospace Academy. “If the workforce is going to look like the world today, we have to do our job in reaching students at a young age.”

“We do hands-on practical learning applications. One of NASA’s strategic assets is sharing NASA content with the community,” said Darlene Walker, Glenn Research Center Office of Education for NASA.

Morgan State University has sponsored the STEM Day Extravaganza since 2012, according to Jonathan Wilson, Director of the Baltimore MUREP Aerospace Academy and Associate Professor of Biology.

“Each year we have a fun-filled day or hands-on and minds-on STEM activities for K-12 students and family members across the state of Maryland,” Wilson said.

Jarreau Brown, who accompanied his eight-year-old daughter Jai, says STEM is the “way of the future.”

“This program teaches her a lot about avenues of building a career at an early age. If someone had brought me to programs like this, I’d be better off. That’s why I [brought] her here [today].” Brown said.

Exhibitors engaged students and their families in a wide variety of activities from flight simulation with the US Air Force AETC, to examination of biomes with the American Society for Microbiology.

“The more kids we have who are excited about science, the better chance we have of getting them going in a career that will matter to them and the world,” said Don Luckett, NIH Communications Director for Scientific Review.

Luckett and his team from the NIH Center for Scientific Research developed a game that was originally tested by children at the USA Science and Engineering Festival.

“We’re here excited to beta test it out on the kids here to see how well we did,” said Luckett.

Students like Jai and Ariel Eley (14) from City Neighbors Hamilton School in Baltimore said the experience was a helpful tool in acquainting them with the learning what it takes to earn a scientist’s lab coat.

“Our children’s game, walks kids through the whole process of being a scientist which is really unique,” said Luckett.

The Baltimore MUREP Aerospace Academy is a hands-on/inquiry based program for K-12 students and their families to “increase participation and retention of historically under-represented K-12 youth in STEM” according to Academy officials.

The program is free for all Maryland K-12 students. The Baltimore MUREP Aerospace Academy also offers in-service and pre-service professional development in STEM disciplines for all K-12 public and private school instructors.