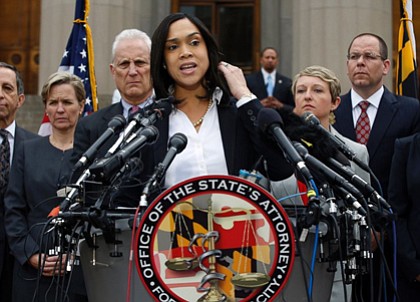 BALTIMORE — Whether it’s domestic violence, robbery, assaults, child abuse or any other crimes, victims suffer a great deal of physical and emotional harm.

For several years now, the Baltimore City State’s Attorney’s Office has not only been an advocate for victims, prosecuting and holding assailants accountable but officials have also been raising money to reimburse those harmed by crime to enable them to cover expenses, including replacing broken and stolen property; crime scene clean up; and medical treatment.

“The Crime Victims Fund Run/Walk, [which is] sponsored by the Office of the State’s Attorney is a necessary initiative in our efforts to provide immediate assistance and support to victims of crime in Baltimore City,” said Caron Brace, the chief of staff for State’s Attorney Marilyn Mosby, who will help emcee this year’s event. “The fund is available to victims of domestic violence, robbery, assaults, child abuse, and sexual assault as well as families affected by homicide who meet the criteria.”

This year, the 13th annual Crime Victims Fund Run/Walk is scheduled for Saturday, October 1 at 9 a.m. at the Inner Harbor. Participants will gather at the Rash Field Kaufman Pavilion near the Science Center beginning at 7:30 a.m. Registration is $25 prior to race day and $30 on the day of the event.

T-shirts will be provided to the first 400 participants who register and cash prizes and trophies will be awarded to the winners.

Officials hope to raise $20,000, which they expect will benefit as many as 90 crime victims and their families each year.

“In order to maintain the Victim Emergency Fund, we need the continued support of everyone to ensure the emergency resources available to victims of crimes committed in Baltimore City are not depleted and continue to be available to those in need of them,” Brace said. “In previous years, we have averaged 300 to 400 participants; however, it has been three years since we hosted the Crime Victims Fund Run/Walk. Therefore, we are hoping we will have as many participants support the event as in previous years.”

Mosby’s office noted examples of how the fund has helped, including a recent incident where a victim’s vehicle was stolen and eventually recovered by police.

The thief drove through a tunnel on numerous occasions without paying the toll and, eventually, the victim received the bill for non-payment of toll fees. While a portion of the fees was waived the balance was paid from the fund.

In another example cited by the office, an elderly woman was walking to a convenience store to purchase a money order to pay her rent. A group of youths robbed her, taking the money she had planned to use for her rent payment. The victim’s rent was paid through the fund.

When asked about a specific experience that underscores the importance of the Fund Run/Walk, Brace noted a resident named Loretta Bailey whose son was murdered in 1991 and whose family has participated in the Crime Victims Fund Run each year.

“The Fund Run/Walk is the opportunity to show support for other homicide families and crime victims,” Bailey said. “It feels good knowing that I am making a difference in the lives of others. I also enjoy fellowshipping with the other participants and I always have a wonderful time at the post-race party.”

While organizers hope that participants enjoy a good time, the goal of the event is to raise money to help provide emergency assistance for crime victims who have no means to recover their losses, according to Brace.

“Crime does not discriminate; anyone can fall prey to criminal activity. The Office of the State’s Attorney is one of few state’s attorney’s offices in Maryland that has an emergency fund,” she said. “We need everyone to support this effort to maintain this much-needed resource.”

For more information about the fund or to register for the event, call 410-396-1897, or visit: www.victimfundrunbaltimore.com or www.charcityrun.com.