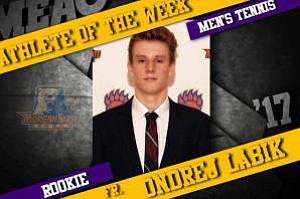 Araoz (Fr., Pilar Buenos Aires, Argentina) went 4-0 in singles play and 3-1 in doubles play this past week. In singles play, he picked up straight-set victories against James Madison, Coppin State and Morgan State – and his three-set win over Richmond’s John Karlawish in the No. 1 position helped the Pirates pick up their lone point of that match. Along with Matthew Foster-Estwick, Araoz picked up doubles wins over James Madison, Coppin State and Richmond.

Labik (Fr., Czech Republic) was a perfect 4-0 last week, picking up two wins each in singles and doubles competition. He defeated Delaware’s Dominick Perez 6-2, 6-2 in the No. 4 spot after handing Hampton’s Fedor Shirin a 6-2, 6-2 defeat in the No. 3 position. Labik was also 2-0 in doubles action for the week, teaming with Nihit Rawal to pick up a 6-4 win over Hampton and a 6-2 win over Delaware.

Roki (Jr., Toronto, Canada) defeated Savannah State’s Lili-Morgan Pastore 6-0, 6-1 in the No. 3 singles position this past Sunday, helping the Lady Wildcats pick up an important conference victory. She also teamed up with Alejandra Vidal to defeat Jennyfer Vivas and Bria Burrows 6-0 in the No. 2 doubles spot. She also picked up singles and doubles wins against South Carolina State on March 27.

Fortuno (Fr., Vila-real, Spain) was a combined 5-0 last week, picking up three singles victories and a pair of doubles wins. Fortuno picked up a 6-0, 6-0 win over Maryland Eastern Shore’s Tearrnaey Peak – before defeating MDES’ Alese Brown 6-0, 6-0 – and then she picked up a 7-5, 7-5 win over Howard’s Sajela Harlow. Fortuno also won doubles matches against Howard (6-4) and Maryland Eastern Shore (6-0).

Christian Duchnak (CSU) picked up a pair of singles wins against Bucknell and Rider in the No. 2 position.

Andre Sturniolo (CSU) played in the No. 6 position, picking up a straight-set win over Hampton and a three-set victory against Rider.

Mariam Mitaishvili (HAM) picked up a pair of conference wins, earning a pair of straight-set singles victories against Coppin State (6-1, 6-3) and Morgan State (6-3, 6-4).

Liza Gordeeva (NSU) picked up singles wins against Howard and Maryland Eastern Shore, while also picking up a doubles win over MDES.