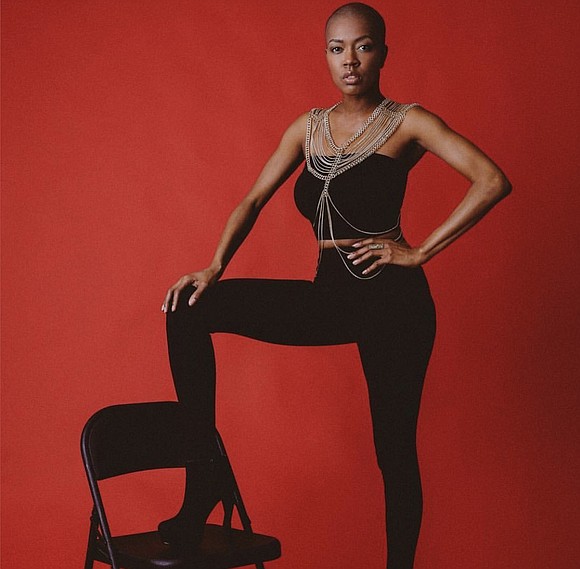 Trina Isaac refuses to let cancer define her or to let the disease stop her dreams. She was discovered by designer Luna Joachim and is now an international fashion model walking the catwalk in places like New York and Paris— with her ostomy bag. Courtesy Photo

“I have always— from diagnosis— wanted to show others that living with cancer is not a death sentence,” Isaac said. “You ultimately get to choose how you live with cancer. I welcome every opportunity to tell my story to encourage other people to take control of their life and how they live with cancer.”

Isaac says she is no inspiration but just a mom determined to see her teenage son grow up.

“I just so happened to be crazy enough to share my journey with the world,” she said.

As chronicled by her colleagues in a blog post on Johns Hopkins’ webpage, Isaac began working at the hospital in 2008. She recalled feeling sluggish,

Surgery followed to remove a large portion of her colon and doctors began chemotherapy treatment. The cancer continued to grow, persisting even as doctors prescribed more chemotherapy and radiation. In 2013, Isaac had a permanent colostomy to surgically remove more of her cancerous colon.

“I was diagnosed in April of 2012, my reaction probably was different from many people,” she said.

“I remember the doctor saying, ‘Trina you have cancer.’ I said, ‘Ok now what are we going to do about it?’ I decide in that moment I was going to be the person that beat the odds and tears was not going to make cancer go away,” she said. “My theory was, I had cancer

before I knew and outside of my minor symptoms I was doing fine so why should anything change because I knew? I was very deliberate that I was going to get treatments and go to work, still be a mom. I refused to be considered a patient.”

Isaac has continued her career at Johns Hopkins and recently became a member of the Osto Beauties, a Baltimore-based group that was formed to spread awareness of woman of color living with ostomies. She is also serving as an ambassador for Johns Hopkins’ Sidney Kimmel Comprehensive Cancer Center’s Hope Project, which she said allows her to speak to first-day chemotherapy patients, providing them with an understanding of what to expect.

Isaac has been discovered by designer Luna Joachim and she is now an international fashion model walking the catwalk in places like New York and Paris— with her ostomy bag.

A video she shot also made its way to the “Ellen” show and went viral.

“I actually did the video to cheer my son up over losing our dog. The house was so quiet when he came home from basketball practice so I decide we needed to have some fun,” Isaac said.

“I had just come from chemo and was surfing Instagram and saw [a] challenge on [pop star] Ciara’s page and decided to do it. It was unplanned and done in one take with my son as the videographer,” she said. “I wrote a simple post on Facebook telling the story of my day dealing with chemo and posted the video. I think people were amazed I had so much energy after the long day of chemo I had. It went viral and everyone kept telling me to tag Ellen, so we all did and it ended up on Ellenation.com. Ciara also posted it to her Instagram page.”

The illness opens eyes of many people and seeing a bald woman on the runway that just so happens to have cancer evokes much thought, Isaac said, noting that the visual supports her message of living despite adversity.

“I have stage IV colorectal cancer with metastasis to my liver and lungs. The biggest change is all the time I have to put in for doctor’s appointments, bloodwork, juggling wok, my son and cancer,” she said. “I think I just live a purposeful life now. I always encourage people to #MMOP— Make Memories on Purpose— and I hold myself to the same standard. My message to others battling cancer is keep living, remember your mind is stronger than cancer.”