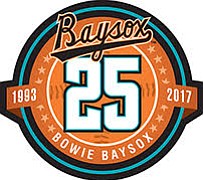 BOWIE, Md. - The Bowie Baysox are seeking Military Hero Nominations to be used in the Military Heroes Card Set being given away during the game Friday, July 21. Fans living in the area who know active or retired members of the Armed Forced are encouraged to fill out the nomination form on www.baysox.com.

During Military Heroes Appreciation Night Friday, July 21, the Baysox will distribute a 20-30 card set to the first 1,000 fans ages 18 and older featuring active and retired members of the Armed Forces received through the nomination process. The cards will feature photographs and information about their military careers. The Baysox will honor these veterans and/or their families in special ceremonies before and during the game. Baysox fans living in the Maryland and Washington, D.C. region who have family or friends in the military can help the Baysox honor their service by nominating them for this special card set.

“We are very excited to bring this promotion back for a fourth season,” said Baysox Assistant General Manager Phil Wrye. “With our stadium’s proximity to so many military bases, there are numerous men and women who deserve special recognition for their service to our country. This card set giveaway is another great way to honor local Military Heroes.”

In order for a nomination to be considered, all information in the online form must be completely filled out. The Bowie Baysox will make every attempt to select an even number of nominations from each branch of the service, while also attempting to include Military Heroes that have served in different decades. These are subject to the information received during the nomination process.

Nominations will only be accepted through the online form on www.baysox.com and all nominations must be submitted by 5:00 p.m. Friday, Apr. 21. Following that deadline, the Baysox staff will randomly select 20-30 nominations to be included in the Military Heroes Card Set.

Military Heroes (or their families/relatives) that are included in the Baseball Card Set will be invited to attend the Bowie Baysox game on July 21 at 7:05 p.m. to take part in ceremonies before and during the game. Each selected nominee will receive four Box Seat Tickets to the game and will also receive additional instructions prior to the game date.

Questions about the nomination process can be directed via email to info@baysox.com. The nomination form can be found online at: http://www.milb.com/content/page.jsp?ymd=20170328&content_id=72248234&fext=.jsp&sid=t418&vkey=.

The 2017 Bowie Baysox season is presented by Money One Federal Credit Union. The Baysox 2017 home opener will be Thursday, April 13 against the Harrisburg Senators at 6:35 p.m. Don’t miss out as the team prepares to celebrate its 25th Season. Baysox season tickets plans are available at www.baysoxshop.com .