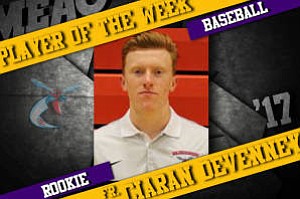 Mauricio (6-0, 180, Jr., Midlothian, Va.) helped Norfolk State to a 3-1 record this past week, batting .538 (7-for-13) and scoring a combined four runs. He had a pair of three-hit games, including a 3-for-3 effort in the first game against Delaware State – a game in which he hit his first home run of the season. Mauricio was also 3-for-5 against Coppin State, and he drove in a run in three of the Spartans’ four games. For the week, Mauricio slugged .923.

Devenney (5-11, 205, Fr., Manalapan, N.J.) drove in eight runs in four games for the Hornets, including six in the first game of a three-game set against Norfolk State – a game in which he hit a grand slam. He also had a pair of doubles on the week, and Devenney had a pair of two-hit games. For the week, Devenney batted .385 (5-for-13) and scored seven runs.

Norris (6-1, 165, Jr., Coral Springs, Fla.) gave Bethune-Cookman its first no-hitter since 1995, leading the Wildcats to a 1-0 win over Savannah State in the second game of Saturday’s doubleheader. He struck out five in going the full seven innings, helping Bethune-Cookman secure the series win.

Nazier McIlwain (CSU) drove in a pair of runs against Maryland Eastern Shore and had two multi-hit games on the week.

Aubrey McCarty (FAMU) was 3-for-4 with two doubles and two RBIs in a 10-0 win over North Carolina A&T State to close out the series.

Octavien Moyer (FAMU) drove in three runs, on a 3-for-4 effort, in the second game of Saturday’s doubleheader against North Carolina A&T State.

Michael Johnson (NCAT) struck out five and only gave up one run in 6.2 innings in a win over Florida A&M.

Evan Holland (NCCU) went 3-for-3 with two RBIs in the series finale against UNC Wilmington with a double and a walk.

Carter Williams (NCCU) drove in a pair of runs in a win over UNC Wilmington, going 2-for-5 at the plate.

Brandon Melendez (NCAT) went 3-for-4 with three RBIs, hitting a triple and a home run, against High Point.

Stephen Baughan (NSU) was 2-for-4 with a home run in the second game of a three-game set against Delaware State.

Devin Hemmerich (NSU) struck out a career-high 13 batters against Coppin State, before striking out nine in a win over Delaware State.