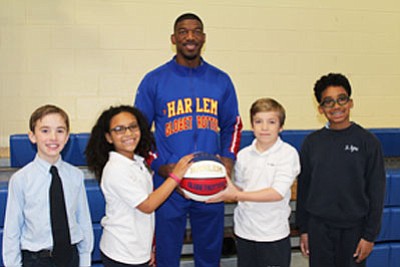 BALTIMORE — For some basketball players standing at the free-throw line— 15 feet from the basket— and making it, can be stressful. But for Anthony “Buckets” Blakes a member of the iconic Harlem Globetrotters for 15 years, shooting a basketball 583 feet and 8 inches is just another trick shot. The 6’2” guard broke the record for the highest basketball shot ever taken in North America with an epic shot off the Tower of the Americas in San Antonio, Texas.

Some may call it practice but for him, it’s all about doing what he loves— traveling the world, entertaining families, playing basketball and empowering youth across the globe.

Before the team’s March 25 games in Baltimore, Blakes visited area schools to discuss the team’s anti-bullying initiative, “The Great Assist,” which spotlights the ABC’s of anti-bullying. A is for action; B is for bravery; and C is for compassion.

As the team’s brand ambassador, Blakes engaged in conversations with students at St. Agnes School about how to handle bullying scenarios, including cyber-bullying, during his March 22 visit. Blakes noted that cyberbullying “can hinder you later in life.” Students were encouraged to post only positive content about themselves and others, if they were to post anything at all.

Blakes shared simple techniques on how to manage their reactions when confronted by a bully. Fifth grader Finn Smith said he would not verbally retaliate with a bully. “I would try to keep the mean things to myself,” said Smith.

Seeking the counsel of a teacher or an administrator was the number one alternative for third grader Veronica King.

“I would tell an adult and hopefully the bully will get the punishment they deserve,” she said.

Sixth grader Hahns Hairston opted for a different approach in responding to a bully’s actions.

“If someone [a bully] is doing something to you, don’t over-react,” said Hairston. Remembering a bully he responded to in the same way, Blakes could relate.

A native of Arizona, Blakes was introduced to the game of basketball at age five. Even then, he knew he wanted to become a professional athlete. Entering his 15th season with the Harlem Globetrotters, Blakes has traveled across the United States and to 79 countries.

“Regardless of religious affiliation, culture or race— joy and happiness is universal, and that’s what we all strive for,” he said, recalling the one commonality he noticed among people he met along his travels.

During the school visit, Blakes simulated The Magic Circle, a pre-game warm-up routine practiced among the Harlem Globetrotters. The practice session is filled with a series of basketball tricks. With the team’s theme song, “Sweet Georgia Brown” by Brother Jones, playing in the background, the school’s principal, Dr. Eric Watts; administrator Makenzie Weber; and three other students were taught a series of basketball tricks to perform with Blakes.

The popular tune has been associated with the Harlem Globetrotters’ multi-generational, crowd-pleasing performances for 92 years.

Blakes says what makes basketball so popular among youth is that it “involuntarily develops life skills in kids.”

“There is constant movement in the game and we come together to reach a common goal,” he said.

If he was not with the Harlem Globetrotters, Blakes says he would be working with kids in some capacity. Blakes encourages students to “find out what’s unique and cool about you and do that.

“Be the best you that you can be, because it’s very difficult to be someone else.”