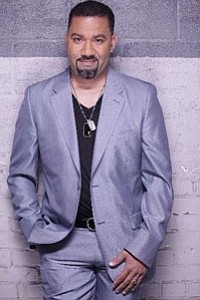 Marcus Johnson will be part of the business panel at the Uplifting Minds II (ULMII) entertainment conference at Security Square Mall in Baltimore on Saturday, April 22, 2017. For more information about the conference, call 562-424-3836 and ask for “Uplifting Minds II” coordinator. or visit: www.UpliftingMinds2.com. Courtesy Photo

Johnson’s most popular jazz numbers include “88 Ways to Love,” “Summertime Flo,” and “Danny's Song.” Marcus Johnson has released 17 albums. His first album Lessons in Love sold 40,000 copies independently. The album was released while he was a student at Georgetown University via his label Marimelj.

Radio host Giovanni joins the list of media sponsors of the one day “ULMII” entertainment conference via BESOS Radio for her “Giovanni Live Stream Radio Show.”Giovanni is a new age radio jock as host of the “Giovanni Live Stream Radio Show” on BESOS Radio syndicated via the Crown Media App and the Fleet DJ Radio App www.FleetDJRadio.com (as of April 10, 2017). Both free apps are available at the Google Play App Stores. Giovanni airs live daily from 12 to 2 p.m.

Other media sponsors of Uplifiting Minds II, include: www.EURweb.com (over 85,000 visitors a week), Praise 98 FM’s “Lady Charmaine Live” Show at www.Praise98F.com and www.ThePulseofEntertainment.com (over 60,000 hits a week). To see if you qualify to be one of the top ten acts to perform, visit: www.UpliftingMinds2.com or email: Info@ThePulseofEntertainment.com. You can also call 562-424-3836 and ask for “Uplifting Minds II” coordinator. www.UpliftingMinds2.com