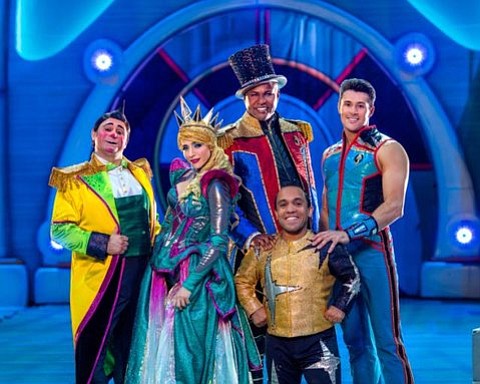 Iverson with other principal characters from the show. Courtesy Photo/Ringling Bros

For 146 years, Ringling Bros. and Barnum & Bailey® Circus has entertained generation after generation of families with their extraordinary performers and exotic animals. The circus returns to Baltimore’s Royal Farms Arena from April 20, 2017 through April 30, 2017 with “Out Of This World,” featuring an immersive circus experience that takes families to space to witness incredible acrobatic performances on different planets.

Sadly, the title of the latest tour fits the reality that the famed circus will soon be out of this world, as it will hold its final performances in May.Feld Entertainment, Inc. parent company of Ringling Bros. and Barnum & Bailey® producer of live family entertainment, announced in January that the iconic circus would hold its final performances at the Dunkin’ Donuts Center in Providence, R.I., on May 7, and at the Nassau Veterans Memorial.

Since 1998, clad in his top hat and suit, Ringmaster Johnathan Lee Iverson has welcomed audiences before each circus performance with the words, “Ladies and Gentlemen, Children of All Ages, Welcome to The Greatest Show On Earth!” Iverson, who holds the distinction of being Ringling Bros’ first African American Ringmaster talked about the “The Greatest Show On Earth” coming to a close.

“It has everything you can imagine,” said Iverson. “It’s heartbreaking. We often take things for granted, and then they are gone. However, more daunting than the show closing is the fact that a culture, lifestyle, and piece of America will be gone. We really won’t know the full effects of it until some years from now.”

According to Feld Entertainment, the decision to end the circus tours was made as a result of high costs coupled with a decline in ticket sales, making the circus an unsustainable business for the company. Following the transition of the elephants off the circus, the company saw a decline in ticket sales.“We are grateful to the hundreds of millions of fans who have experienced Ringling Bros. over the years,” said Kenneth Feld, Chairman and CEO of Feld Entertainment. “Between now and May, we will give them,one last chance to experience the joy and wonder of Ringling Bros.

”Iverson is a native of New York, and graduated from The Hartt School, a comprehensive performing arts conservatory at the University of Hartford. Iverson shared how his nearly 20-year-career with Ringling Bros. began.

“I had just graduated from college and was gearing up for a career in opera,” recalled Iverson. “I was auditioning for a dinner theatre. The director for the dinner theatre was also with Ringling Bros. and put me into a pool to audition. This opportunity presented itself and I wanted to try it out. I didn't know any Ringmasters which made it even more appealing.”

Iverson's strong singing ability, dynamic voice, energy, charm, charisma, theatrical style, and other attributes landed him what he considers to be ‘the greatest job on earth.’ Iverson’s wife Priscilla, son Matthew and daughter Lila, also perform with the circus. “My immediate family is involved,” said Iverson. “This all has been a dream come true. It’s been a wonderful adventure, and truly magical.