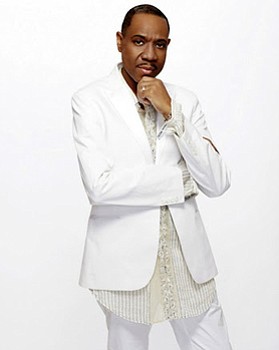 With 11 No. 1 hits and 30 soundtrack tunes, Freddie Jackson arrives with a soulful, love movement with the sizzling new single, “One Night” Courtesy Photo

New York, NY (BlackNews.com) -- With 11 No. 1 hits and 30 soundtrack tunes, Freddie Jackson arrives with a soulful, love movement with the sizzling new single, “One Night,” featured on his album, “Love Signals.” Billboard has proclaimed the crooner, “one of the greatest of all time top R&B/hip-hop artists.” He has enjoyed 18 songs in the Top 10 with 11 tunes rocketing to No. 1. He earned an American Music Award and three Grammy nominations.

The Harlem native arrived on the music scene in 1985 with the now-classic soul album, “Rock Me Tonight.” Fellow church member Paul Laurence penned the title track for his platinum selling album. The tune shot to the No. 1 spot and sat there for an amazing six weeks.

“You Are My Lady,” was another crowd pleaser, hitting the charts at No. 13. The smashes continued with “He’ll Never Love You (Like I Do)” and “Love Is Just A Touch Away” sending them straight to R&B Top 10.

Jackson’s duet with Melba Moore, “A Little Bit More,” went to No. 1 R&B and he followed that triumph with the platinum selling album “Just Like The First Time” in 1986. The album’s No. 1 hit singles included “Tasty Love,” “Have You Ever Loved Somebody” and “Jam Tonight.”

He shined with soundtracks for 30 TV shows and films. He appeared on the soap, “One Life To Live” and sang “He’ll Never Love You (Like I Do).” His music was featured on many TV sitcoms including “The Golden Girls” and “Family Matters.”

Jackson’s music appeared in the children’s film, “All Dogs Go To Heaven” while “Rock Me Tonight” was featured in the classic, “Love & Basketball.” He appeared with his song, “All Over You” in the movie, “Def by Temptation” and as the King Of New York with his tune, “Dream On” alongside Laurence Fishburne and Wesley Sniples.

His new single, “One Night” from the album “Love Signals,” proves that the fabulous and fresh Freddie Jackson has worked his music magic again. He teams up with Gerald Albright on “Hold Me Tonight,” and each song is the pulse of passion and light. “All I Wanna Do” will surely become an anniversary tune for lovers. While “Save the Babies” is a global cry for help.