It's "Mann vs. WoMann" on the next episode of The Manns - Tuesday, April 25 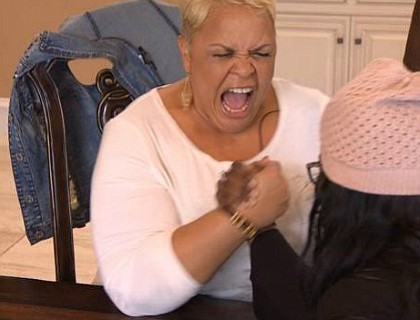 Changing Flat Tires, Chopping Wood, Waxing and Wearing High Heels Are Among the Challenges to Determine the Stronger Sex Courtesy/TVOne

SILVER SPRING, Md. — The Mann Clan stage a Battle of the Sexes on the next episode of The Manns airing Tuesday, April 25 at 8 p.m. ET on TV One.

On the next episode of The Manns, When Tamela is suspected of going through “the change” the Mann clan find themselves in debate over which sex has things harder. The battle of the sexes is set and through much competition, one winner will prevail; but will it be Mann or WoMann?

While the “Battle of the Sexes” rages on, David Sr. is forced to face some difficulties of his own, when he finds out that his little brother has been deeply affected by David’s actions when they were young. David has to face his mistake in order to right this decade’s old wrong. But is it already too late?

The Manns is produced by TV One in partnership with Entertainment One (eOne) and Bobbcat Films. It is executive produced by David and Tamela Mann, eOne’s Tara Long and Mark Herwick, Roger M. Bobb and Phil Thornton. For TV One, Lamar Chase is executive-in-charge of production, Robyn Greene Arrington is vice president of original programming and production, and D’Angela Proctor is head of original programming and production.

View a clip from the upcoming episode: The Manns 104: Mann vs WoMann