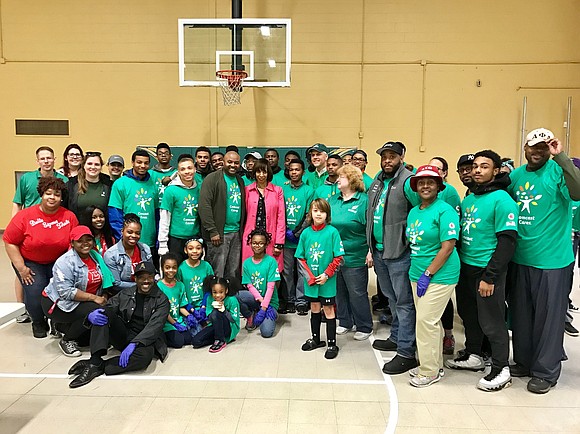 With more than 100,000 volunteers helping to improve 1,000 project sites at community centers, schools, gardens, parks, beaches, and more throughout the United States and in 20 other countries, Comcast Cares Day was a hit.

The April 22, 2017 event called for volunteers, made up of Comcast employees and family members and local fraternities and civic organizations, to perform cleanup and other work at Farring Baybrook Park and Recreation Center— helping with landscaping, painting and the beautification of the park and center.

A staple each year for Comcast, cleanup and beautification work was happening at other locations in recognition of Earth Day, including the Maryland Center for Veterans Education & Training; The Arc of Baltimore at Homeland and The Arc of Baltimore at Dundalk; sorting, packing, weighing and labeling food boxes at the Maryland Food Bank in Lansdowne; and planting trees, picking up trash, painting and other work at the Northwest Academy Health Sciences and surrounding communities in Pikesville.

The 16th annual Comcast Cares Day met and in some cases exceeded expectations as approximately 500 volunteers braved the rainy and wet conditions to perform work at Baltimore City parks and other areas.

“I’d say it was successful, that it met expectations,” said Brad Palazzo, the director of external affairs at Comcast.

“Everyone was really galvanized. Our company comes out in force and it brings a sense of pride and hope in those communities that there’s a company willing to devote their Saturday and pool together resources and people for a great day,” said Palazzo, who joined Comcast 12 years ago and almost immediately began taking part in Comcast Cares Day.

The special day of service has become an annual tradition for tens of thousands of Comcast employees, their friends and families, and numerous nonprofit partners who join with the cable company to make change happen in communities and celebrate the company’s culture of caring year-round, according to Palazzo.

“The park in Baltimore is where these residents go on a sunny day or, even in this case on a rainy day, and our volunteers worked through the rain. It’s special,” Palazzo said.

Volunteers spent the day mulching, caring for flower pots and trees, picking up debris and trash at the park and inside the recreation center at Farring Baybrook, and putting smiles on the faces of many, including Mayor Catherine Pugh who also came out with the volunteers.

“The mayor was out there and that was really nice and inspiring of her,” Palazzo said. “I talked to a couple of our employees who were all muddied and wet from the rain, but they wanted to make their lasting impressing, leave their lasting mark on the community.”

“We had a lot of stuff to do inside too, so folks were able to come in and paint murals and put together things for kids, and repair tables and chairs,” Palazzo added.

The park and recreation center is known for hosting therapeutic recreation services; Special Olympics; five-on-five outdoor soccer; track and field; a Bocce program; wheelchair softball and a variety of other recreation.

Other nearby locations that Comcast volunteers performed work included joining the Big Brothers Big Sisters of the Greater Chesapeake, Inc. for bowling and pizza; landscaping, painting and cleanup at The Harford Center in Havre de Grace; partnering with the Boys & Girls Club of Westminster to beautify Francis Scott Key High School in Union Bridge and Carroll Lutheran Village in Westminster; assisting with indoor and outdoor renovations at the Boys & Girls Club of Westminster’s headquarters and future location; repairing fences, cleaning barns and relocating the antique supplies at the Carroll County Farm Museum; and painting fences and bathrooms, consulting dug outs, mulching, planting and general cleanup with the North East Action Club at North East High School.

“It’s great for our employees. It’s a day where you can loosen up your tie and wear comfortable clothes and bring your family and interact on a social level in an environment where you’re giving back,” Palazzo said.