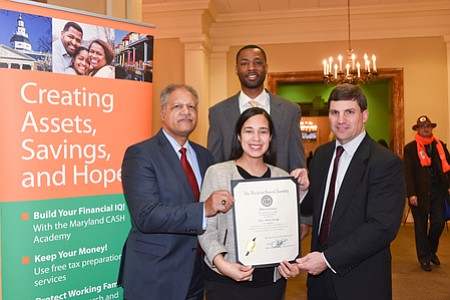 Colleagues and friends describe Tisa Silver Canady as a champion of financial education both at work as an advisor to UMB graduate students and as a volunteer across the state with the Maryland CASH campaign.

Canady has even published a book that draws parallels between financial education and life goals.

With the month of April noted as National Financial Education Month, it’s fitting that Canady has been honored with the Maryland CASH campaign’s 2017 Community Champion Award.

“It [the award] means I have succeeded in making a difference for the better. It is nice to be recognized, but many accolades are tied to a job,” said Canady, who, after earning a bachelor’s degree and an MBA at the University of Delaware, went on to become a professor at that school before going to work at the University of Maryland, Baltimore.

“This is a special honor because it is related to a series of personal choices as opposed to professional obligation. Service is and always will be a part of my life,” she said. “To be able to serve and make a difference is more than enough for me. To be recognized for it, especially by organizations across my home state that are involved in the work of financial education; its a huge bonus.”

Having grown up in Mitchellville, Canady now makes her home in Bowie. She is married to a teacher from Northeast Baltimore. Canady says she is a “huge advocate” of financial education, which she has made her life’s work. Canady also works with young individuals, including incarcerated youth.

Financial education focuses on a range of financial management concepts and behaviors including budgeting, careers and income, credit, savings, financial decision-making, and understanding values and habits about money, according to the release.

For Canady, it’s all a reminder of where she began and where she still hopes to go. “I think the turning point came in middle school when I seriously began considering the cost of college. My parents had talked about college for as long as I could remember,” said Canady, who is also a student in the Community College Leadership Doctoral Program at Morgan State University.

“On one hand, my Grandma Lucille talked about selling Avon to help put my father through Howard University. On the other hand, my mother talked about working summer jobs and gaining independence during her college years.

“In the seventh grade, I had a forward looking principal who had her students take the SAT in middle school. Around the same time as the test, I began thinking about two goals: paying for college and getting a car. Soon after the test, I approached my parents with a deal. I asked them if they would buy me a car if I received a full scholarship to college. They agreed and obtaining a full scholarship became my first major financial goal,” she said.

In the spring of 1996, Canady accepted a full scholarship from the University of Delaware and in August, her parents purchased her a car.

The college selection decision taught Canady much about weighing financial options such as in-state versus out-of state,rural versus urban, on-campus versus off-campus housing, she said.

The car decision exposed her to the importance of credit and the nuisance of haggling--the overall experience made her look at financial decisions more deliberately, she said.

“When you know better, you can do better. I wanted to do better and I wanted to help others to have the same opportunity,” Canady said.

The importance of recognizing National Financial Education Month is underscored by the attention given to making informed decisions, she said. It’s also a reminder that financial education starts at home.

“Children begin learning financial lessons long before they begin school, so the best thing a parent or guardian can do is lead by example and get educated and, it’s never too late to learn,” she said.