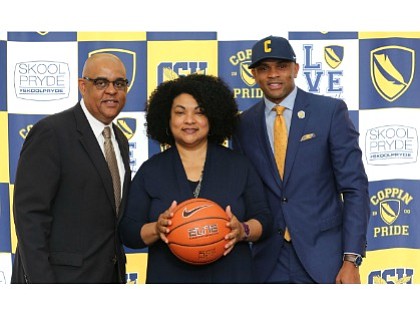 "We are extremely excited to have Coach Dixon here at Coppin State University," said Carter. "He has had many achievements in his life through hard work and dedication and for that he has received numerous recognition from all levels of basketball. His tenacity, his determination, his passion, his relentless attitude and finally his strong desire to give back to his home city of Baltimore are the traits that we were seeking in the new leader of our program."

"I would like to thank Dr. Maria Thompson and Mr. Derek Carter for giving me an amazing opportunity. My vision is to take our University to the next level. I will be a leader at Coppin State that you and the city of Baltimore will be proud of. Everyday my staff and I will grind to make a difference in not only our student-athletes lives but the student body and the surrounding communities. I promise to do it at a high level.

Dixon comes to Baltimore from the University of the District of Columbia, where he posted a 3-25 record in his only season with the Firebirds women's basketball team in 2016-17.

Prior to UDC, Dixon served as the Special Assistant to the Head Coach on the Men's Basketball coaching staff at his alma mater, University of Maryland. There he supported 2015 Big 10 Conference Coach of the Year, Mark Turgeon, by enhancing game plans and strategizing how to attack opponents offensively and defensively. He helped implement offensive sets and defensive principles, analyzed and broke down film, and mentored, motivated, counseled and developed student-athletes, including future NBA players Alex Len, Diamond Stone, Jake Layman and Robert Carter, Jr.

Dixon also coached DMV's Finest and Team Maryland during The Basketball Tournament (TBT) in Philadelphia, PA, and directs his own Juan Dixon Basketball Camp and Premier Basketball Camp, both in Baltimore, MD.

One of the most celebrated student-athletes in Maryland history, Dixon remains the all-time leading scorer in program history (2,269 points) after leading the Terrapins to their first national title in 2002 as a senior. He holds six different records in program history, ranging from points, games played, steals and 3-pointers.

The Most Outstanding Player of the 2002 NCAA Final Four and ACC Player of the Year, Dixon earned two All-America selections, three First Team All-ACC selections and two All-ACC Tournament selections throughout his illustrious career. He averaged 16.1 points, 4.2 rebounds, 2.6 assists, and 2.4 steals in 141 games from 1998-2002.

Dixon was drafted with the 17th pick of the 2002 NBA draft by the Washington Wizards, where he spent three seasons. He signed with the Portland Trail Blazers in 2005, and he averaged a career-high 12.3 points during his first season with the team. After stops in Toronto and Detroit, Dixon wrapped up his nine-year NBA career with the Wizards in 2008-09.