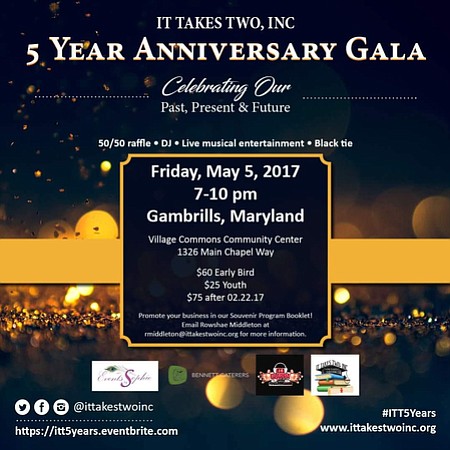 It Takes Two, Inc. will hold a gala to celebrate the organization’s fifth anniversary on May 5, 2017, from 7 to 10 p.m. at Village Commons Community Center, located at 1326 Main Chapel Way in Gambrills. Courtesy Photo

Money is tight for some people at one time or another. Single mothers and fathers may particularly find themselves in greater need of a financial hand-up at some point while raising children. Jaemellah Kemp, founder and CEO of It Takes Two, Inc. knows the struggle very well.

The Crofton resident developed an avenue to enrich the lives of youth through her Anne Arundel County-based nonprofit. She once faced a difficult decision years ago when her son, Brandein Savage was headed to kindergarten. Should the single mother buy food for the week or should she pay for her son’s school supplies? Kemp worked out a solution through personal support.

She later listened to her God-given vision to develop leaders of tomorrow by creating a nonprofit, which includes a Tools for Success Scholarship for students between

4th grade through college (or age 26). The applicant must be a single parent who meets an income requirement.

“Our income requirement is exactly the same salary or income level as the free and reduced lunch schedule. So, our target population are those families who are at the poverty line, or below the poverty line,” Kemp explained. “They’re not able to provide the basic necessities for their young people, and for us that’s school supplies, books and uniforms.”

Prospective scholarship applicants living in or stemming from a single-parent household in Anne Arundel County, Prince George’s County, Baltimore County and Baltimore City must also have a cumulative grade point average (GPA) of 2.5 at the time of applying and submit an age-appropriate essay. The nonprofit also offers life skills workshops throughout the District of Columbia, Maryland and Virginia. Four pillars focus on bullying, financial literacy, college and career readiness, and youth entrepreneurship.

Additionally, It Takes Two, Inc. will hold a gala to celebrate the organization’s fifth anniversary on May 5, 2017, from 7 to 10 p.m. at Village Commons Community Center, located at 1326 Main Chapel Way in Gambrills. The nonprofit’s first black-tie event will include dinner, live entertainment and the recognition of youth honorees and community partners.

“It’s a major milestone in business for any business but especially a nonprofit to have lasted for five years— so we celebrate that. The fundraising aspect is to support our Tools for Success Scholarships. The scholarships are micro in that they range anywhere from $200 to $500, so with the support of this fundraiser, we hope to increase the amount that we’re able to award,” Kemp said. “We’re also looking to increase the amount of the awards that are given out. Our goal is to award 10 scholarships in this scholarship season alone… and we’re also looking and hoping to provide a free summer tutoring camp to those families who can’t afford tutoring, but they know that their… children need help.”

The impact of her organization’s work is evident through scholarship recipients like 19-year-old Mikeya Dunnigan. The sophomore who attends Pennsylvania State University heard about Kemp’s nonprofit during morning announcements while in the tenth grade at Charles Herbert Flower High School in Prince George’s County.

Dunnigan wrote down the information and applied. Her mother died of breast cancer when she was nine years old and her father became a single parent of four children. The grateful scholarship recipient received uniforms, school supplies, $400 for college tuition expenses and also a care package from Kemp’s nonprofit. Dunnigan added that Kemp is a third wheel of support who checks on her.

“People should help It Takes Two because it’s a pillar that makes a significant difference in everyday people’s lives,” Dunnigan said.

The organization’s sixth scholarship season opened on April 1, and will close on July 1, Kemp says the scholarships will be awarded on August 1, 2017.

“I always like to say this is truly a faith walk. I am out there on the water. We have not sank, we have not drowned. As long as we are being obedient in following what it is that God has for us, and opening the doors... actually He’s creating some doors for us, so we’re thankful for that,” Kemp said. “ We’re just trying to relieve some of the financial burden for single parents through the scholarship.”

To learn more about of It Takes Two,Inc., or to make a donation, visit: www.ittakestwoinc.org.