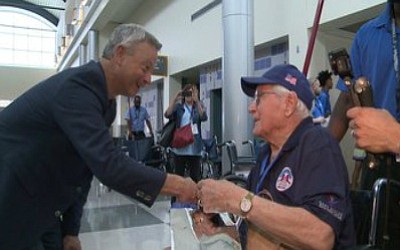 This program brings veterans to the National World War II Museum in an effort to collect stories from these war heroes.

Actor Gary Sinise, known for playing Lt. Dan in Forrest Gump, a role for which he received an Oscar nomination, said this program is all about preserving history and honoring these veterans.

"There's never been a more devastating war in human history than what happened in World War II. We have these living, breathing libraries of history. We want to spend as much time with them as we can," Sinise said.

These veterans will stay in New Orleans until Friday. Tomorrow they will visit the National World War II Museum. Their stories will be documented by the museum to be used in their archives.

"There's no better way to share my appreciation for them to spend time with them, pat them on the back and thank them for what they do," Sinise said.

Sinise said it's our responsibility to not forget about our veterans.

"We all have a role to play in giving back to our defenders. Start in your own neighborhood. Reach out to them," he said.

The Gary Sinise Foundation partnered with the World War II Museum and American Airlines to make this possible for these veterans.