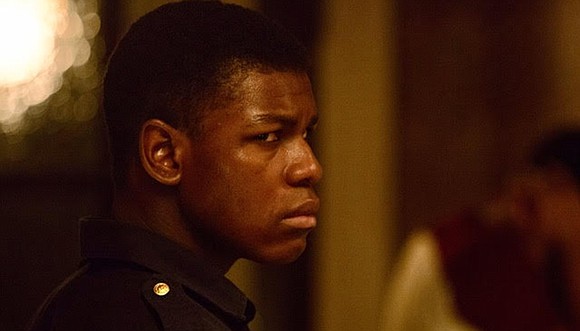 NNPA — “Detroit” tells a story of racial injustice and police brutality, based on fact, which is easy enough to believe and has parallels with today's problems with police criminality and impunity. But since this important subject is not new, what is the point of the film? What are we learning that is unique? What actionable knowledge are we getting from a tragic, racist event that happened 50 years ago? Unfortunately, “Detroit” fails to deliver on any of these points.

1967 Detroit. The raid of a black after-hours club, the arrest of its patrons by police and general frustration with discrimination sets off days of riots and looting. One night, Larry Reed (Algee Smith, “The New Edition Story”) lead singer of the teen soul group The Dramatics is slated to do a debut performance in a Motown review at a theater that attracts blacks and whites. Cops close the venue down, due to the imminent danger on the streets outside.

Larry and his buddy Fred Simple (Jacob Latimore, “The Maze Runner”) seek refuge at an $11-a-night motel called the Algiers. There they meet two White girls (Hannah Murray, Kaitlyn Dever) and wind up talking to them in Larry’s room. Shots ring out from an Algiers’ motel window, which is near a National Guard prep area. The Detroit Police Department, Michigan State Police and Michigan Army National Guard swarm the hotel, which is now under siege. They are led by local White patrolman Phillip Krauss (Will Poulter, “The Revenant”), who has just been reamed out by his commanding officer for shooting an unarmed looter in the back.

Krauss instigates an intimidation process, lines up some of the black male hotel guests and the two White females against a wall in a hall and harass them. Verbal and physical abuse ensues. Krauss institutes a “death game”: The cops take a victim into a room, close the door, fire a shot and pretend to kill him. This ruse is designed to instill fear into the others and scare them into ratting on the guy who fired the shot from the window. Before the night is out, the police murder three Black males.

A security guard Melvin Dismukes (John Boyega, “Star Wars: The Force Awakens”) witnesses the event. Sometimes he is a part of the problem, and sometimes he helps the victims with supportive words: “Don’t antagonize the guys. I need you to survive the night.” An Air Force veteran named Greene (Anthony Mackie, “The Hurt Locker”) is one of the hostages and Army Warrant Officer Roberts (Austin Hébert) is part of the posse. When the sun comes up and the bloodshed is over, the cops are arrested, a lame trial is held, and no one serves any jail time for the misconduct or homicides.

In this thinly conceived film, written by Mark Boal (“The Hurt Locker,” “Zero Dark Thirty”), Blacks are not bright enough to fight the law or status quo (minus fleeting appearances by Congressman John Conyers, played by Laz Alonso), and whites are generally one-dimensionally evil or complacent. Any viewer looking for more than a retread of anguishing racial injustice will be sorely disappointed. There is nothing of value here except an epoch of history and a little-known tragedy that corroborates that Black people have been the victims of violence and police brutality for decades, and specifically in the explosive 1960s.