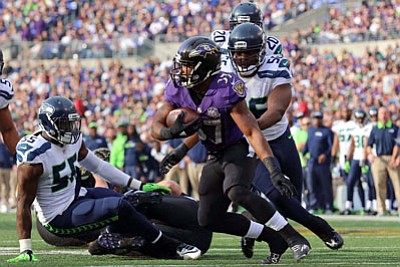 Baltimore Ravens third-year running back Buck Allen has experienced a roller coaster during his first two years in the NFL. He entered the league as a third round draft pick with high hopes.

Allen was used as a threat out of the backfield as well as carrying the ball in the zone rushing scheme featured by the Ravens. Then came the fumble. It happened in week 14 against the Seahawks.

Allen fumbled once again the following week against the Chiefs, and what had been a promising rookie season ended on a sour note.

If there is one thing that irks Ravens head coach John Harbaugh, it's fumbling the ball.

Allen only carried the ball nine times last season and he has vowed to work hard so that he never has so little involvement on offense again.

During the offseason, Allen lost his cousin just before minicamp.

"He is pretty much like my right-hand man. He was there when I was training," Allen explained during a press conference recently. "Wherever I needed him to be, he made his way there. Mentally, when you always have that one person that is never going to let you slip, it kind of brings the extra work up out of you.

"I know, for me, not having him there just made me want to push myself even harder, because I know if he was there he would push me."

Armed with a two-fold source of motivation, Allen is hoping to return to the field to show that he is worthy of being a large part of the rushing attack.

Fellow running back Terrence West is the starter but there should be opportunities for Allen as well.

Entering training camp, Allen was buried on the depth chart behind West, newly signed back Danny Woodhead and second-year back Kenneth Dixon.

Dixon had what will likely be season ending knee surgery last month. An opportunity for Allen has opened up, and he plans to take full advantage.

"I know the work that I put in, and I know it is going to show and pay off. I just have to translate it to the game," Allen said. "It is just when you get that chance and opportunity, you just have to seize it and take advantage of it, and don’t look back."

New rushing scheme coordinator Greg Roman has laid the groundwork for an attack that fits Allen's patience, vision, and cutback ability. It's a scheme that Allen is very comfortable executing.

"I think I fit great. It is just all about trusting it, and I love the scheme. [Greg Roman] is doing a great job," Allen said. "The way he is coaching the offensive line, coaching the fullbacks and the tight ends. We all work together as one unit.