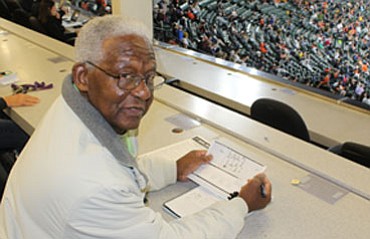 Harold "Hank" Allen in the Baltimore Orioles press box, where he continues to work as a scout for the Houston Astros. Timothy Cox

When Harold "Hank" Allen was a kid growing up in rural Lawrence County, Pa., near Pittsburgh, he and his younger brother Richard "Dick" Allen never imagined they'd someday become teammates in the major leagues.

At age 76, Allen continues his career in the Major Leagues as a scout for the Houston Astros, one of the best teams in the American League. These days, you can catch him working working in the press box at Camden Yards in downtown Baltimore with the Baltimore Orioles or in Southeast Washington, D.C. where he often sits among working media types at Nationals Stadium.

Allen played seven years in the major leagues as a valued utility man, first in the Phillies’ minor league system, in addition to longer stints in the major leagues with the Washington Senators, Milwaukee Brewers and the Chicago White Sox. He still maintains a gleam in his eye, when it comes to working among his peers, and discussing professional baseball. 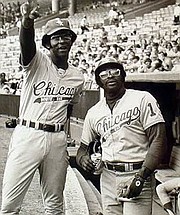 (Right) In a rare pose, Allen brothers, Hank (left) and Dick (right), finally joined forces with the Chicago White Sox in September 1972. It was their first time as teammates since leaving Wampum High School in Wampum, Pennsylvania.

He is the older brother of Richie “Dick” Allen, one of the most prolific major league power hitters of all-time. Dick Allen now lives in Tampa, Florida and "enjoying a life of retirement," according to Hank. For the record, Hank noted that in his hometown of Wampum, Pennsylvania, Richie was always known as "Dick," but the Philadelphia Phillies’ media named him "Richie" in comparison to former Phillies great Richie

Asburn. He was also known as the "Wampum Walloper" or "Sleepy," his family nickname.

Many of Dick's teammates disagree that Dick Allen was referred to as a "Clubhouse Lawyer," a player who spreads negativity to the entire team. Conversely, most vouch for him as being a helpful mentor. Several major league notables can't believe that Dick Allen has not yet been elected to Baseball's elite Hall of Fame in Cooperstown, N.Y.

For the past 18 years, Hank Allen has enjoyed a successful scouting career. Prior to joining the Houston Astros, he spent nine years with the Milwaukee Brewers.

with convenient access to the ballparks in both cities— always looking to enhance his team's roster.

"My role is to update the current roster and to scout other major league teams in order to improve our team," said Hank who even at his age, maintains his six-foot, athletic-built frame.

The Allen brothers eventually played together with the White Sox in the early 1970s, which was the first time they were teammates since leaving high school. Both were Pennsylvania high school basketball champions, leading their Wampum High School teams in 1958 (Hank) and 1960 (Dick), respectively to state titles. Dick would go on to win the 1964 National League Rookie of the Year and enjoy a successful 15-year professional baseball career.

In addition to his baseball career, Hank is also well known in Maryland’s thoroughbred racing circuit. His name rings loudly in places like Laurel Park and at the Pimlico Race Course, home of the annual Preakness Stakes.

Thanks to their father, the late Coy Allen Sr., the Allen brothers were also exposed to horses as youngsters during their rural upbringing. Both men’s affinity for the equestrian trade is the stuff of legends. In 1989, Hank Allen became the first African-American trainer in 78 years to run a horse in thoroughbred racing's most storied event, the Kentucky Derby, when Northern Wolf finished sixth behind Hall of Famer Sunday Silence, according to an article in the Baltimore Sun.

“My father was always involved [with] horses as a kid in Virginia, and he taught us to appreciate them,” Hank explained.