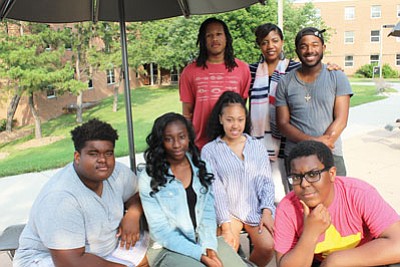 “It’s a place of peace, as long as you create the atmosphere,” he said. Rico established networks with other Upward Bound scholars that he went through the program with and they remain in contact.

Thompson hopes that by broadening their career scope, the students will take advantage of opportunities that are presented to them.

“In addition to learning in school, we want our scholars to educate themselves outside of the school environment,” he said.

Lucy Ekeh raced at the opportunity to attend the summer intensive program. She was accepted into the program and less than a month later she moved into a dorm room. Unlike some other Upward Bound scholars, both of Lucy’s parents graduated from college in Nigeria. Combining her athleticism with academics, the incoming senior at Landsdowne High School is interested in studying law.

“The top three things I gained from the program is a sense of guidance, preparation and responsibility,” said Ekeh. She said her organization and planning skills has increased significantly since the start of the program.