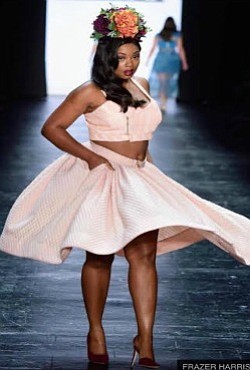 NEW YORK, NY — Super and plus-size model, Liris Crosse is part of Project Runway history once again. After slaying the runway in the Lifetime hit reality competition’s 2015 season finale which crowned its first plus-size designer as winner, Liris will be a contestant on Season 16. This season is historic because it celebrates models of all sizes ranging from 0-22. Coming in at a solid and shapely size 14, Liris is promised to leave the judges in awe and her competition in the dust. Affectionately known as the “Naomi of Plus”, the 5’11” gazelle in heels is ready to take to the runway and make the designers’ creations shine.

Liris Crosse modeling with other contestants.

Liris is having a stellar year. In May, the Baltimore native and Brooklyn resident was interviewed on the Steve Harvey daytime talk show. The beauty, actress and motivational speaker brought her expertise, tools and runway walk from her “Life of a Working Model” boot camp to Chicago to inspire and encourage 15 women dealing with low self-esteem and a lack of body confidence. Liris’ passion is to teach women around the world self-worth. Her motivation to the ladies is to “Make the World Your Runway” which is also the title of her soon to be released book.

Her next stop is in Los Angeles to shoot a top-secret, ground-breaking commercial for a video gaming brand.

Media inquiries and questions should be directed to Christy Stewart at the number or email address below.