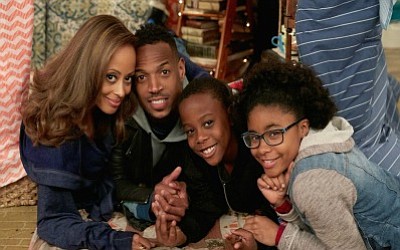 Marlon Wayans doesn't wait for acting opportunities -- he creates them.

"I write most of my movies," he told CNN. "I write and produce out of necessity, which is a gift. If I didn't, I would be waiting in a long line with other actors."

Wayans' latest creation is one that is very close to his heart and his life.

"Marlon" premieres Wednesday on NBC and stars Wayans as "Marlon Wayne," a social media sensation who is co-parenting with his ex, played by Essence Atkins.

At 45, Wayans is himself a dad and said the show is "eighty-seven percent" based on his actual life.

The actor, who comes from one of Hollywood's first families of comedy and who honed his craft on big brother Keenan's sketch comedy series "In Living Color," said his 15 and 17 year-old children are aware they are source material for his new show.

"I told my kids, 'Don't do nothing stupid or you are going to wind up on TV,'" he said, laughing. "I said 'Go ahead son, get arrested. That would be a hell of an episode.'"

Wayans can also be seen in the Netflix film "Naked," which finds him playing a man who wakes up naked in an elevator on the day of his wedding over and over again -- like "Groundhog Day."

The "White Chicks" star said he relished the opportunity to do dramatic scenes and even surprised himself.

"Part of me was sitting there going, 'Oh snap, I forgot I can act,'" Wayans said. "I went to a performing arts high school, and it's a muscle that I haven't been using as much."

Wayans wants to change that and is hopeful that Hollywood will begin to see him as more than just a funny guy now that he has a romantic dramedy under his belt.

"I'm theatrically trained and it's good to do it all," he said. "Every role I do, whether it be comedy drama or action, I just want it to be credible. I want to be like water -- pour me in to any glass and I'll take shape."

To that end, he works "seven days a week all the time," which he loves because it "keeps me sane," Wayans said.

"I'm about to start writing my next movie while I'm prepping to do a special because I want to do a big tour next year," he added. "I grind."

But what about playing iconic comedian Richard Pryor, a role Wayans has very publicly talked about in the past as his dream role? Footage of him auditioning to play Pryor leaked online years ago.

Plans for a film have been announced over the years with various stars attached, but the project has yet to happen.

Should the role of Pryor come his way, Wayans said he's ready but with so much to do, it's not one he's sweating.

"I started out wanting to play a great, and now I want to be a great," he said.