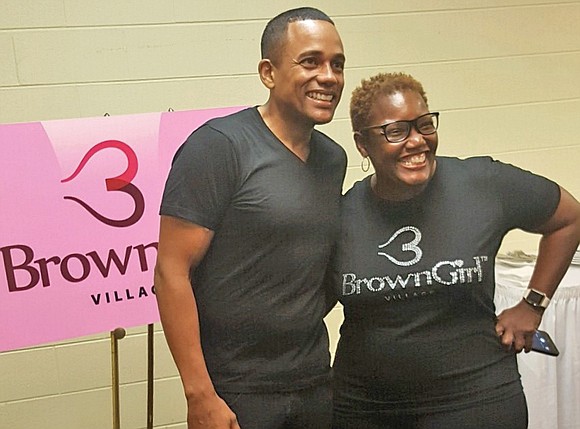 Gary, Indiana — Gary, Indiana was the site for the 2017 inaugural BrownGirl Village tour. Over 200 girls participated in this highly-anticipated summit hosted by Gary Mayor Karen Freeman-Wilson and the City of Gary.

Founded by Baltimore native, Sharon Page, BrownGirl Village is a non-profit organization with headquarters at City Garage in Baltimore City. The organization places an emphasis on underserved girls of color, between the ages of 12-18 and helps them realize that their goals are possible with hardwork, dedication and determination. The organization’s mission is to deposit self-esteem and to inspire girls to serve, innovate and to lead by exposing them to things outside of their normal environment.

Over 200 girls participated in this highly-anticipated BrownGirl Village summit hosted by Gary Mayor Karen Freeman-Wilson and the City of Gary. BrownGirl Village is a non-profit organization with headquarters at City Garage in Baltimore City.

Hill Harper, co-star of the new ABC series “The Good Doctor,” was the highlight of the day. He reminded the girls they were FINE (Fantastic, Interesting, Necessary and Exceptional). His personally penned, acclaimed release “Letters to a Young Black Sister: DeFINE Your Destiny” was a steady narrative for the summit. Hill used excerpts from his book that related to the perils young teens face today in relation to inspiration, self-esteem, support of one another and self-love.

“I am overwhelmed by the success of the inaugural event. I am amazed at the number of participants and parents who have expressed how positive the experience was for them. We have the opportunity to grow this event in Gary, Indiana and look forward to building villages in other urban cities,” said Sharon Page, founder, BrownGirl Village.

The retreat was a full day experience. Summit topics included: Women in Politics, The Beauty of Business, Social Butterfly, Naturally & Authentically You, Fit BrownGirlz, Youth Financial Literacy, BrownGirls Love Science and an Etiquette Lunch. The girls also participated in a 40-minute Zumba class, which was a first for many. The attendees were also surprised and provided a free book bags courtesy of The City of Gary.

“Our inaugural BrownGirl Village Summit was held in Baltimore last year and was very successful, so we decided to take BrownGirl Village on the road. Being a brown girl from Baltimore, I was eager to continue this tour across the United States to inspire and encourage other brown girls to walk in their destiny, in spite of their current situation,” Page said. “Our goal is to have a village in every urban city and we are excited that our first ‘Sister City’ is Gary, Indiana.”