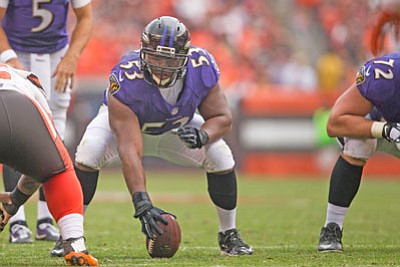 Ravens center Jeremy Zuttah prepares to make a block against the Cleveland Browns during a game in the 2016 season. Zuttah has recently re-signed with the Ravens after he was released by the 49ers. Courtesy Photo/NFL.com

BALTIMORE — The Baltimore Ravens traded center Jeremy Zuttah to the San Francisco 49ers in March of 2016. Zuttah had been a starter at center for the Ravens for three years and was named to the Pro Bowl the same year he was traded.

Zuttah became available after the 49ers released him earlier this month. He had options but chose to re-sign with the Ravens. He is happy to be back in Baltimore.

"It’s cool," Zuttah said after practice last week. "[I’m] just getting out here, getting back with some of the guys I haven’t seen in a while— like Marshal [Yanda]— getting back into the flow of things, learning the offense, and we’ll go from there."

Zuttah cited his familiarity with the organization as a deciding factor in his return. He also appreciates the fact that the organization is equally as familiar with him. It will allow the change of teams to be a smooth transition.

Having been with the organization before, Zuttah knows what is expected of him. They haven't told him that he will be the starting center.

Head coach John Harbaugh is glad to have Zuttah back in the fold. It creates competition at center with current starter Ryan Jensen.

Zuttah fully understands how the Ravens approach football as a meritocracy. He knows the starting job won't be handed back to him. It has to be earned once again.

"The role for right now is to come out, work hard and earn playing time," Zuttah explained. "They said to go out there, compete, and we’ll see where we’re at. That’s honestly where we are."

Harbaugh expects him to pick up where he left off but pointed to some scheme changes that will take a subtle adjustment.

"Jeremy obviously gets right back into practice. It is good to have him back. He did a good job. It was a good start, and it helps us," Harbaugh said last week. "There are some changes with the run-game scheme that are really different in the sense of calls, terminology and even the blocking patterns that he will have to learn and get up to speed on, but he is a veteran player."

With so little time left before the start of the season, the starting center job is up for grabs. Zuttah has previous experience as a starter but Jensen has the inside track since he was around for the complete off-season. It will be interesting to watch the battle unfold.